Step one. Mint Marks: Small letters were used as part of the design identifying branch mint. Important to value.

Values range across the chart according to condition. Grading condition is detailed with images and descriptions. Matching your coin helps judge grade and place on the chart.

Begin evaluating your coin and finalizing value by confirming its Date: Dates of wheat pennies are a main focus in collecting. Each is unique in scarcity, popularity and desirability.

Next: Complete a Judgement of Condition:

When viewing the chart. Notice condition plays an important role separating average 1950 pennies. Above average examples appeal to collectors. Images in the grading section are used to recognize a close match and complete a value process.

Three varieties struck, all interesting to collectors. Date and mint combinations are considered individually when placed into a collection of wheat pennies. An available date and popular as an entry to the hobby. 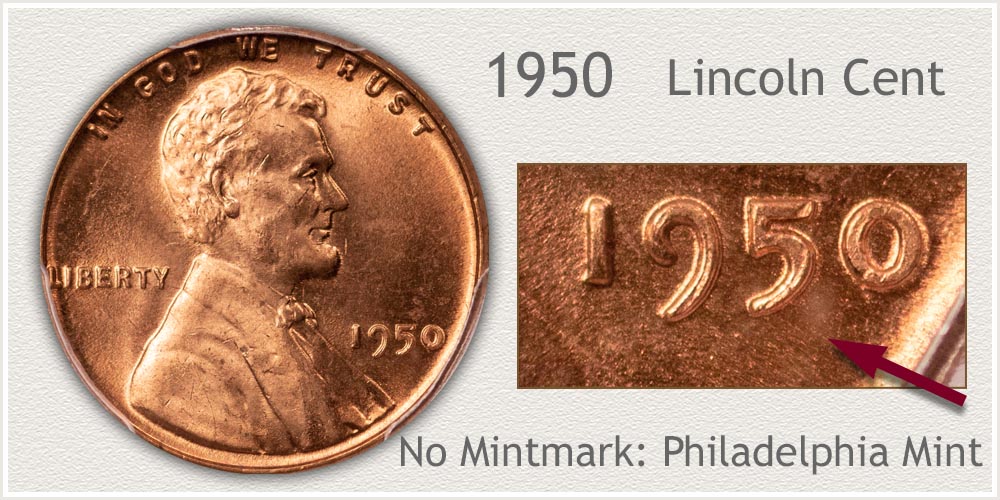 Philadelphia concentrated less on minor denominations in 1950 striking 272,686,386 cents. Adequate to place these as Abundant on a rarity scale. An increase in value and desirability is noted beginning with Extremely Fine condition examples.

A majority of these circulated just long enough to lose a moderated amount of detail to wear. Distinctive areas to inspect are Lincoln's hair and ear, both high in profile. Desirable is a clear, raised separation of his ear from hair. 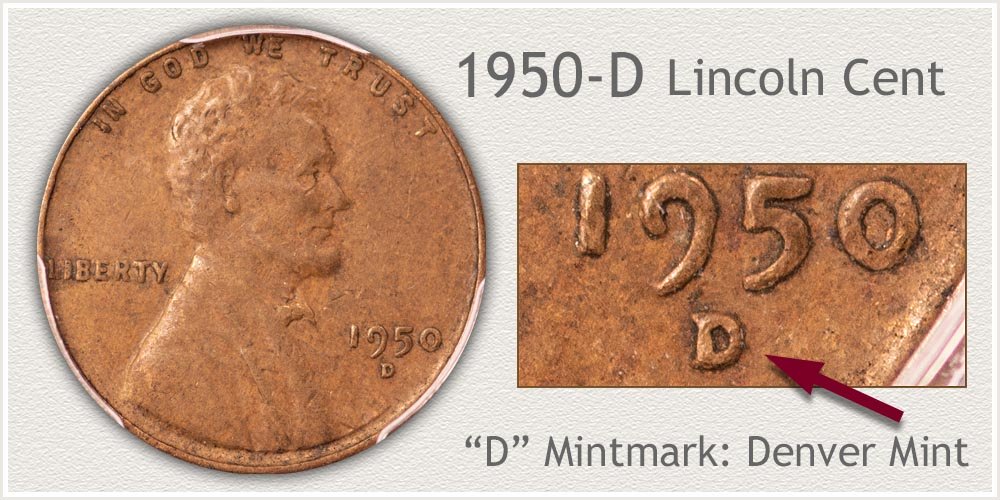 Denver 1950 wheat pennies are Abundant on the rarity scale. 334,950,000 struck, placing 9th highest of all wheat years. Beginning a trend of out pacing the main Philadelphia mint.

In today's market quantities of 1950-D pennies are available. Both in mint state and circulated grades, all are inspected looking for standout examples. Even color is favored over mottled color on mint state examples. Slight wear and sharp definitions to design is sought in circulated pieces. 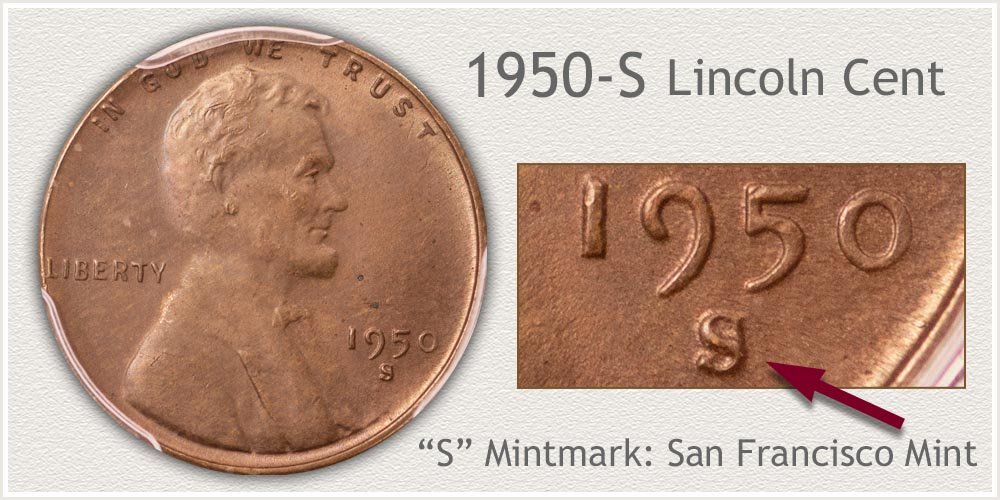 Abundant on the rarity scale, a circulated 1950-S penny enjoys a small premium. Historically San Francisco struck the least of yearly varieties. 118,505,000 in 1950 continued the trend of lowest of year production.

An awareness of low coinage numbers combined with overall popularity is a firm base to value. Interest of collectors is directed towards lightly circulated or finer examples. A pleasing coin is well defined overall. View the reverse, all grains of wheat distinct sets the coin apart.

A "grade" defines the condition of a coin. Specific qualities are inspected as to the amount of wear and compared to the standard for the grade. Key areas are used to judge surface quality. The following images help visualize these differences when judging a wheat cent for condition.

Eye appeal is important to a copper coin and value as a collectible. Overly dark surfaces tend to hide finer detail. 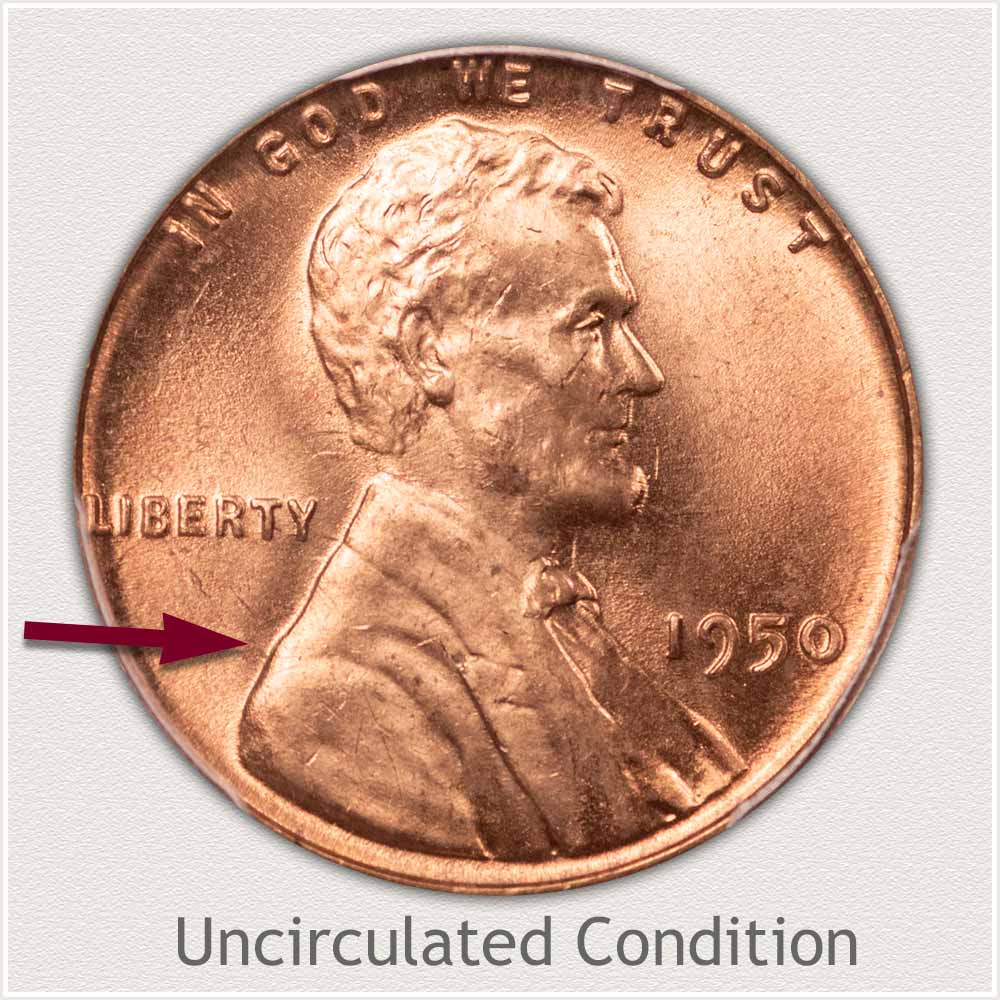 Uncirculated Grade: By the 1950's the dominate collector grade is an uncirculated - mint state grade coin. Large mintage numbers and large saving at the time places these in the abundant category. A key factor in recognizing the mint state condition is no wear to the surface.

Inspect closely the high ridge line at the back of Lincoln. Original fine grain texture causes luster and its delicate nature to wear quickly. Any smoothing of the surface along the shoulder and back indicates wear. Follow the line from Lincoln's collar down to the shoulder looking for a difference in texture.

Colors of Uncirculated Grade Wheat Penny: Changes in color of copper is a natural occurrence. This toning begins to develop as a coin is exposed to air. It is not an indication of wear. Often a slight toning lays on the top most surfaces giving a subdued appearance.

Important to a mint state coin is the texture of luster is "underneath" any toning. A magnifying glass and tilting the coin at a sharp angle see to the surface allows to judge for evidence of wear.

The 1950 wheat cent is fully bright with luster. Next is an example starting to tone around the perimeter. At the end is a mint state coin with almost a complete coverage of soft brown toning. As collectibles; values follow these progressions to the toned coin. Highest in demand is a fully bright wheat cent 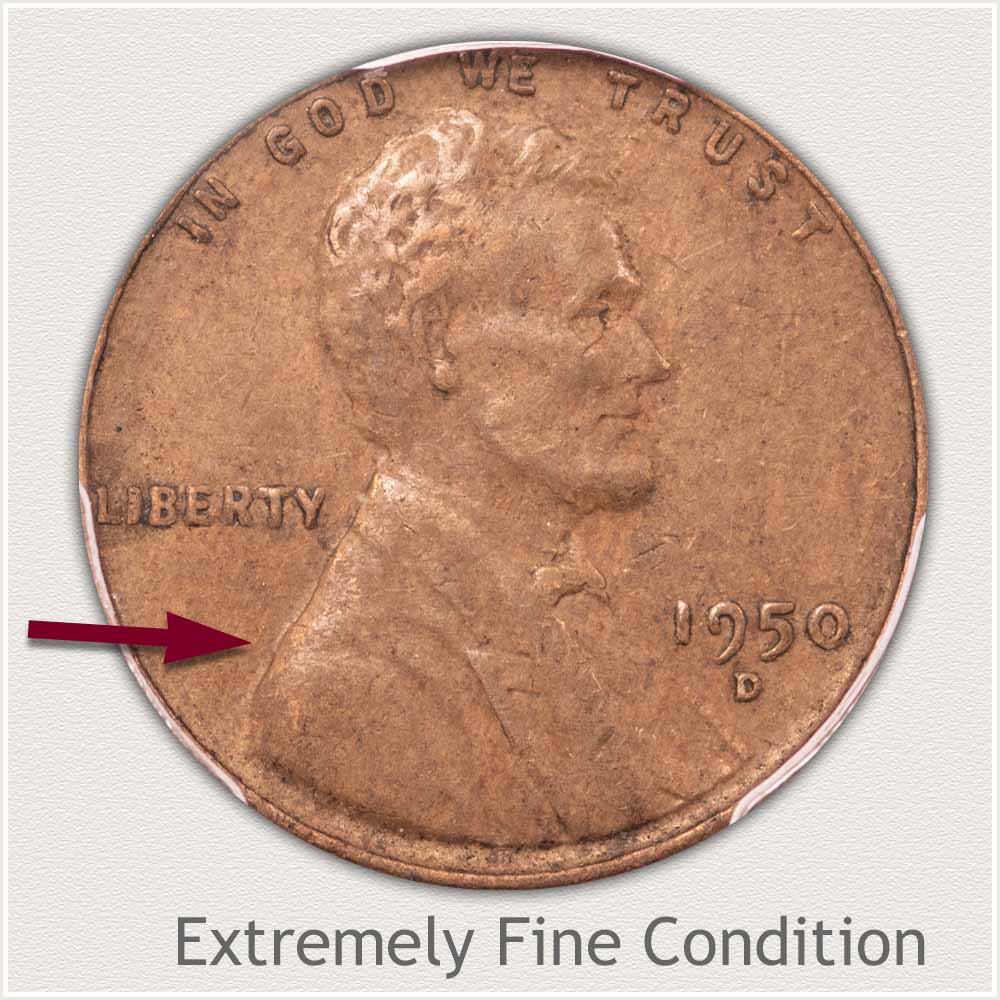 A small degree of smoothing is evident along the coat from Lincoln's collar to the shoulder. Remaining is a distinct lapel and creases depicting the fabric of the coat. It is important to recognize any wear does not form a "flatness" to a rounded profile of the coat rising from the field of the coin.

A nice collectible coin displays soft brown tones, even across the surface. This coin is notable as having no distracting marks and large areas of discoloration. A pleasing, slightly worn wheat cent is a popular, affordable entry to the series. Separate these lightly circulated examples from the rest. 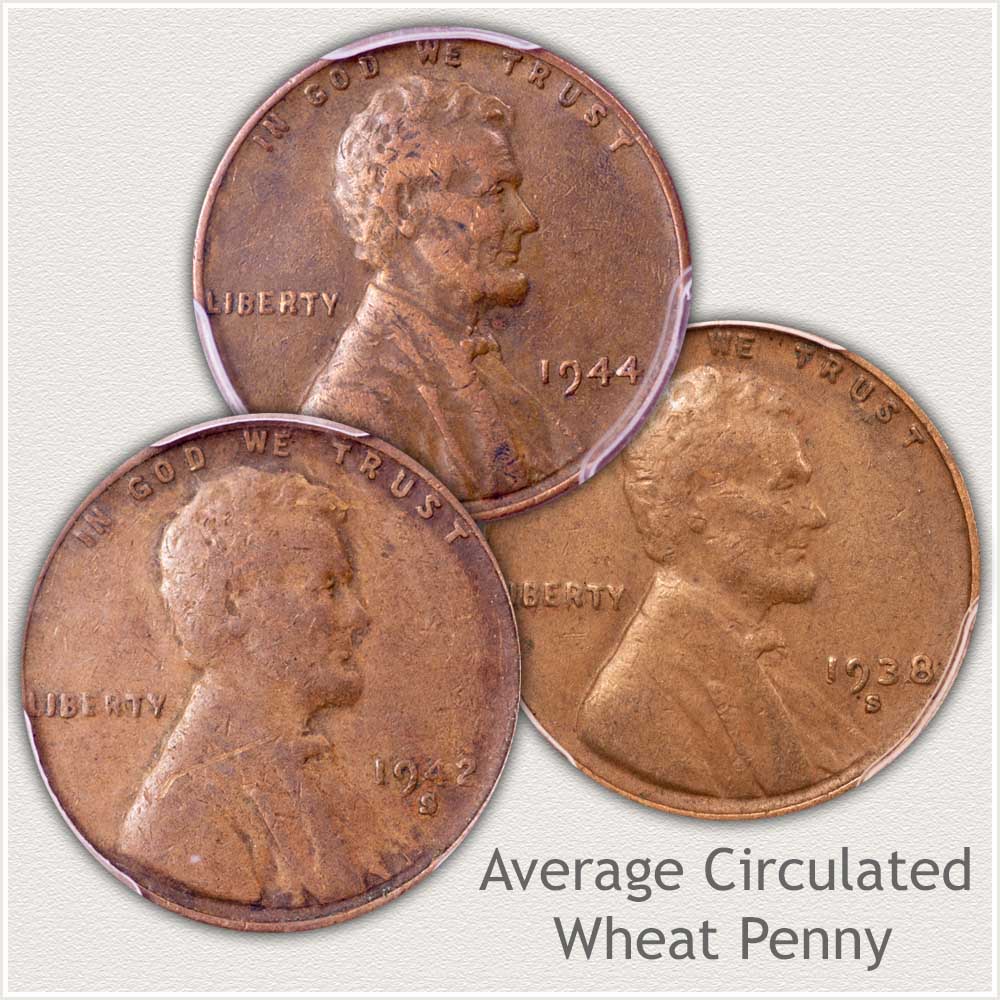 Average Circulated Condition: Saving wheat cents from circulation continued long after the series ended in 1958. Many of the later saves are moderate to heavily worn in condition. These are a large part of the quantities available today.

Moderate condition wheat cents show wear forming flat areas across many features of the coin. Lincoln's cheek, jaw, and hair are flattened and merging with the surroundings. The coins imaged display a typical worn appearance.

An average condition wheat cent forms the base value and condition of the series. Dates in this category are predominate in the 1950's and later 1940's.

By the 1950's the Wheat series Lincoln penny was an established collectible. Early years were showing premiums in value and popularity was adding more collectors of the series. With extra eyes now scanning the millions of cents, noticed was the occasional die break within the lettering of "Liberty". 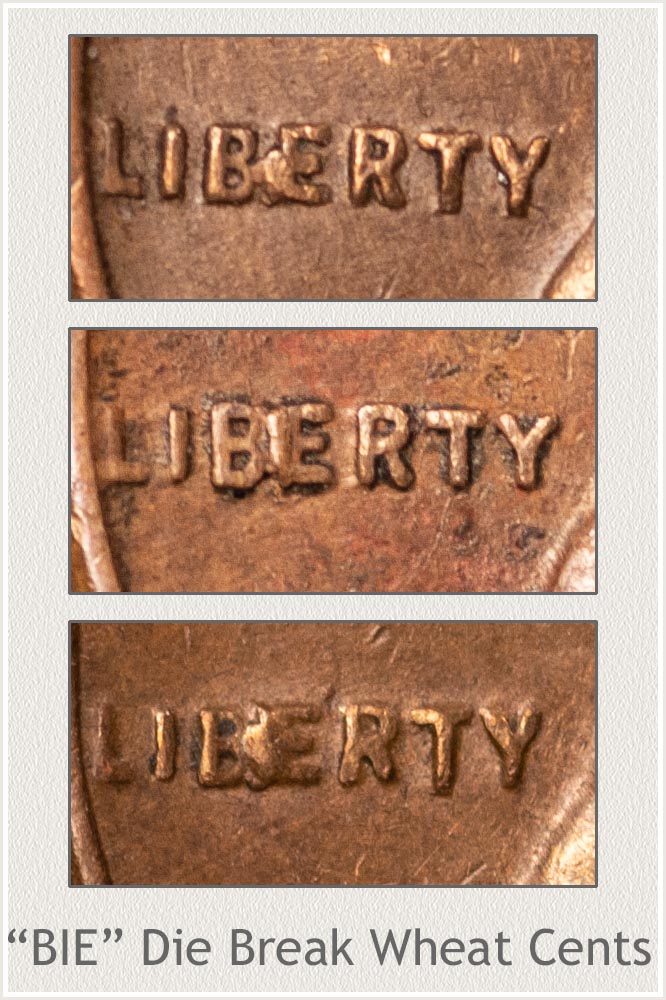 Small sections of the die that create the space between letters, chipped, breaking away. The void left by the broken space filled giving the impression of an extra "I" within the lettering. Often occurring between the "B" and "E" letters, the coins became known as BIE Cents.

These resulting "I's" vary in completeness and aesthetic appeal. The center example in a 1956 wheat cent with a nice representation of the die break. A partial filling and blotchy version are less stunning.

Publicity of BIE cents created a demand in these coins initially with an increase in value. The error was realized as fairly common, with a plentiful supply. Interest in BIE cents cooled and values settled down. Today in most cases they are worth a small premium.

BIE cents are a unique error to the Lincoln cent series only. Set aside any you find. They are a fascination to the series. Notable is the majority of these die breaks are found on coins dated in the 1950's.