Old wheat pennies are collected by dates and mint marks. Also, attention to condition plays a large role in deciding to add coins to a set. Collectors of all ages find Uncirculated to lightly worn wheat cents appealing.

Inspect closely each of your wheat pennies to separate it from the average date and condition. Follow a three-part process.

Step One: Dates are inspected and mint marks are identified. Branch mints placed marks on the coin to identify their production. Each variety is listed on the chart.

Step Two: Compare the condition of your coin to images matching the amount of wear defining its grade. Each stage of wear is recognizable with the help of descriptions pointing to areas of focus.

High production of all three varieties of wheat cents summarizes 1952 in coinage. 71% of capacity was devoted to striking cents. As in all years look for the San Francisco mint variety to find a premium value. 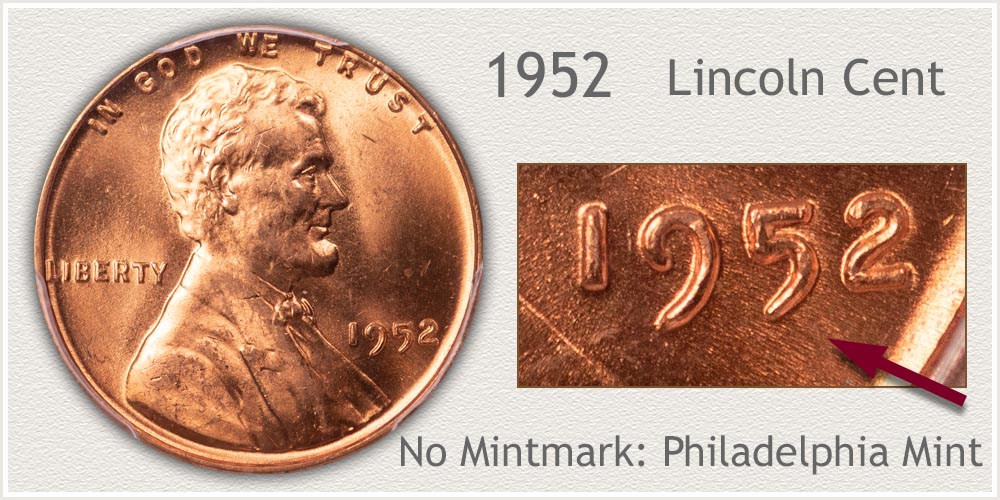 Philadelphia struck an adequate 186,856,980 cents in 1952, enough to meet demands. Many survive today placing Abundant on the rarity scale.

Average condition of a 1952 penny is moderate wear with brown toning covering all elements of design. Indicating a coin set aside early and avoiding extensive use is traces of original red within the lettering. Collectors are always searching for coins with a pleasing quality. A faint brightness among lettering improves overall appeal. 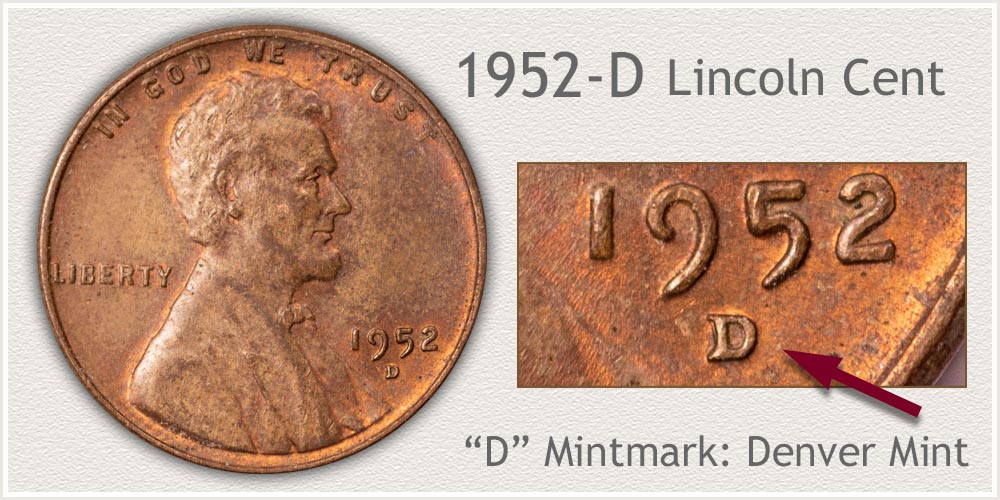 Denver's production of 1952 pennies is the 8th highest of the series. 746,130,000 coined. Another year of striking greater numbers than the other varieties. Larges numbers released places 1952-D as Abundant on the rarity scale.

Mint state coins are available and affordable to collectors. Circulated examples with no more than slight touches of wear are of interest to beginning collectors. An evenly toned circulated coin displaying all lines in the upper ends of the wheat ears is desirable. 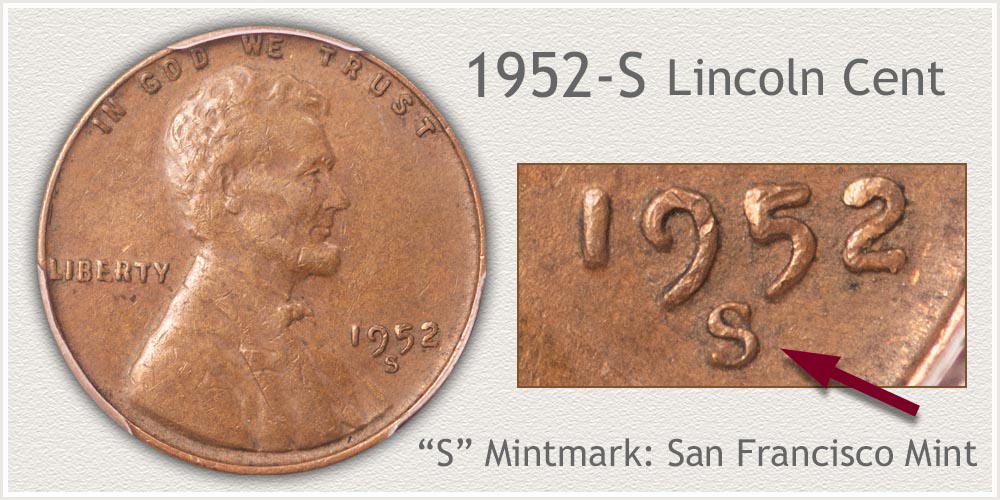 In a general; San Francisco cents are Abundant on the rarity scale. In comparison to the two other varieties of 1952 pennies, it is the least available. Obtaining nice condition and quality examples has a greater degree of difficulty. Values, underpinned by collectors, reflect this scarcity.

An above average 1952-S penny is boldly impressed on both sides. Faded and weakly defined lettering along the rims is often noted, lowering eye appeal. Collector preferences tend towards defined and sharp details.

Collectors inspect each coin, judging condition. Grade, a notation of condition, is determined and used as part of the description of the coin. Collectors and dealers now combine date, mintmark, and grade as they value an individual coin.

Viewing these old copper coins is best done with a single light source. Tiling the coin side to side under a 100-watt light brings details into view. 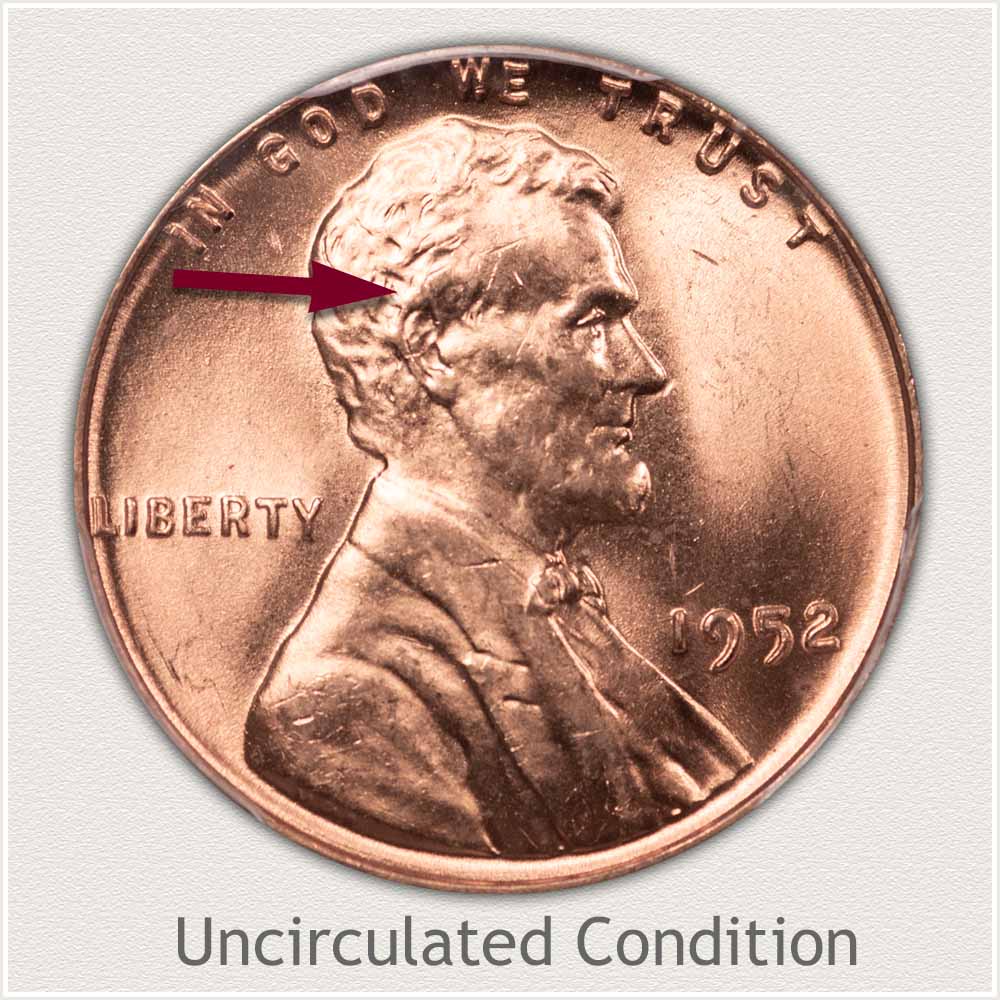 Uncirculated Grade: Vibrant luster shinning from the surface helps to indicate an Uncirculated - Mint State grade. Judging no wear to any part of the coin confirms the grade.

Absence of any wear is critical to placing a coin in mint state grade. Highest areas prone to showing wear is the detail of Lincoln's temple and area over top and behind his ear. Lack of any smoothing or color change is important. Color may deepen over his temple but a texture matching the surrounding areas confirms the coin never circulated.

Strong well-defined details are noted on this mint state 1952 wheat penny. Elements of the ridge forming his temple and forehead are bold. A nice even light-gold color is bright with luster adding visual appeal.

Evaluate Toning of 1952 Penny: Toning over the surface of a copper coin is a natural occurrence. If protected from the air this toning is kept to a minimum. It is these bright color wheat cents from the 1950's enjoying highest demand and value. Of importance; toning is not an indication of wear. Toning lays on top of the surface and colors the metal. A mint state coin is often found with different levels of color change.

The bright original luster 1952 cent has not begun to deepen with toning. As a darker color develops moderate toning is noted as part of the mint state grade. To the far right is an example toned brown but remains a technical grade of uncirculated. 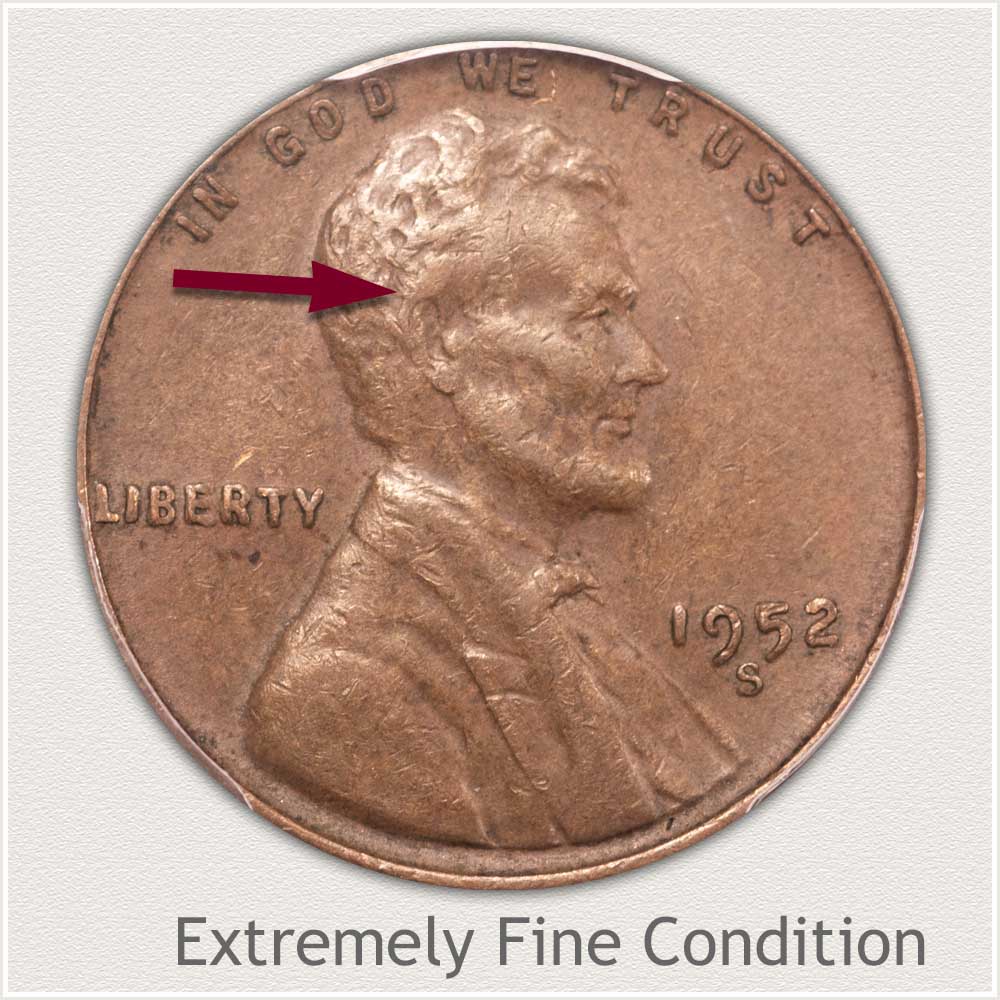 Extremely Fine Condition: Light amounts of wear scattered over the high points of the design identifies the grade.

Lincoln's temple is just beginning to show smoothing. Notice a small curl of hair at the top of the ear now displays a minor but distinct flatness to its once rounded profile. Further behind the ear a curl is now flat and smooth. In some instances, the small curl has blended just slightly with his ear, due to a soft strike. However, the curl is clearly separated from the larger curl of hair just above.

Other areas of the hair are also beginning to show evidence of minor flattening. Importantly, the majority of hair detail is well separated. 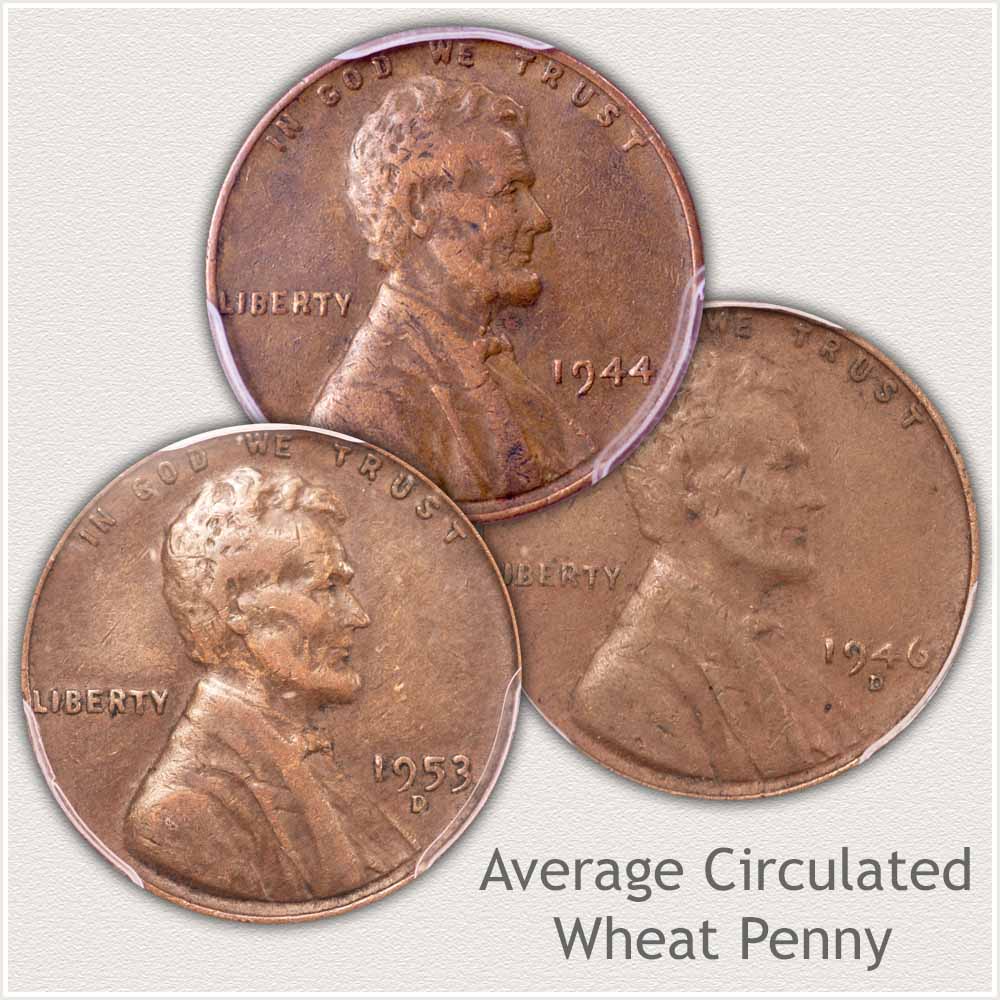 Average Circulated Condition: Viewing the group of circulated wheat pennies, moderate wear is clearly visible. Areas of flatness cover Lincoln's coat, jaw, and cheek. All are worn to a stage of condition below the Extremely Fine grade. These coins are in a class of average circulated condition.

Dates from the 1950's in average circulated condition are the base value wheat pennies. Quantities of these coins are available. Pleasing, eye appealing "S" mint varieties are often separated from the group and enjoy a small premium.

Wheat design Lincoln cents are now a long obsolete series. There greatest value is an introduction into the coin collecting hobby. Beginning collectors starting a collection of wheat pennies find many pleasing examples affordable extending back into the 1930's.

Imaged is a nice example of an error coin widely accepted by collectors. Off-center strikes are a highly visible error leading to premium values. A 1952-D wheat penny, normally a modestly priced coin, is now attracted to specialty collectors. 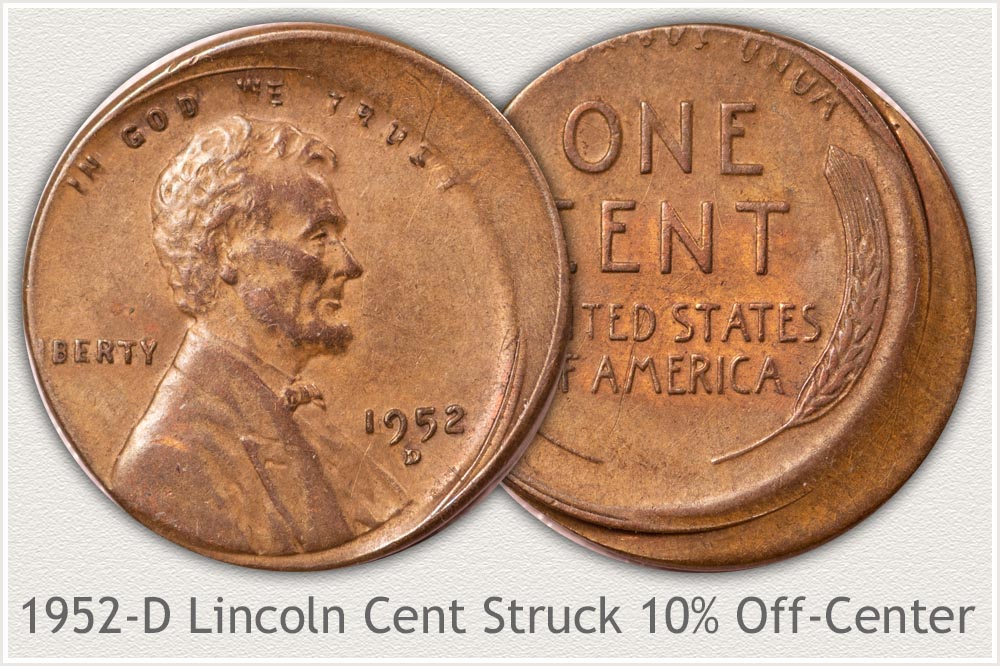 An off-center penny is created by a misalignment during the striking process. It is unintentional and most striking errors are spotted during the quality process and prevented from entering circulation. A blank cent planchet is fed into the coining press, seats improperly and when struck, receives design elements on a portion of the blank.

Value of these error coins is related to visual appeal. The 1952-D penny is attractive with the complete date visible and important elements to Lincoln's bust remaining. Removed from circulation early with light touches of wear it is an interesting 10% off-center wheat cent.

Passion for collecting coins has many specialties. A date and mintmark collection is one very popular theme. Adding an interesting error, in this case an off-center strike adds a fascinating topic to a collection.