Images to match both mint marks and condition are used to compare your coin.

As a popular series, 1924 wheat pennies need close inspection of date and mint marks. A Denver mint coin is scarce.

Mints used small letters to identify their production. Images are used to match and identify the different marks. Collections are formed including dates and mints that struck pennies. Values reflect the scarcity of each variety.

Next step to take is judging condition. Compare your coin to grading images, finding a match judges its condition and place on the value chart.

Three Varieties of 1924 Cents to Identify

All three mints struck 1924 cents, first time since 1920. With these varieties comes many value levels. Collectors enjoy a challenge, part of the enjoyment. Denver 1924 cents are the real challenge to the year. 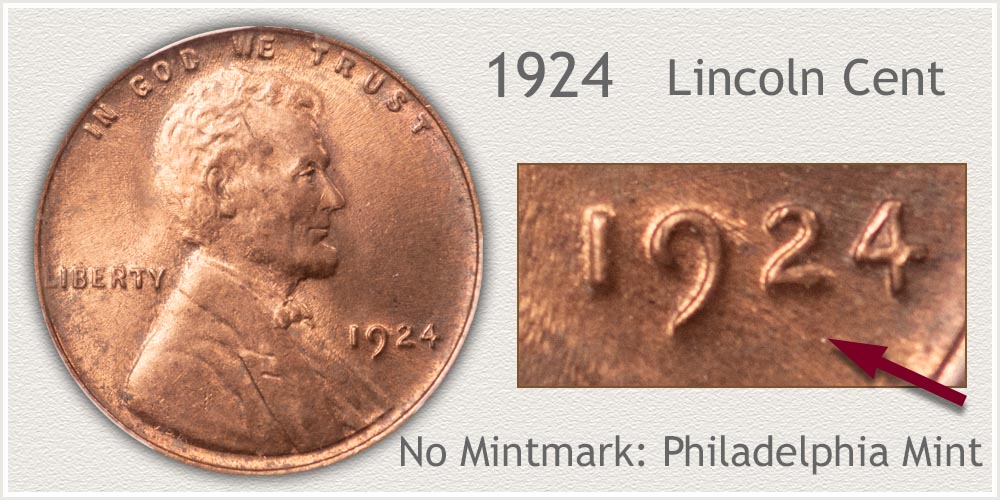 As part of the early years 1924 is notable. Philadelphia cents in worn condition are Abundant. Moving to higher grades these coins are found infrequent. An excellent choice for a collector to improve grading skills, identifying a better condition coin. Value jump in the Extremely Fine grade requires close inspection. 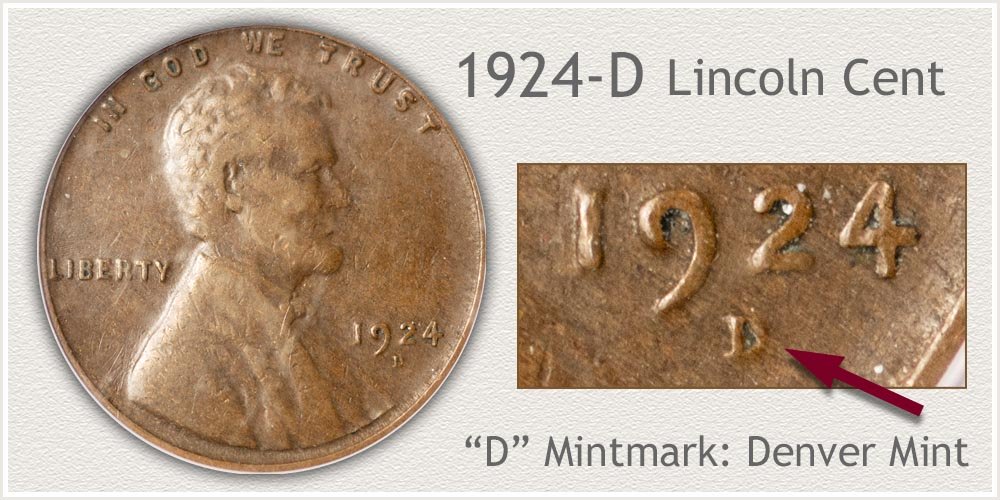 Denver wheat cents of 1924 are the 5th lowest mintage of the series. 2,520,000 struck. Many factors determine their value beyond initial production numbers. Highly valued in any condition, coins with sharp details are avidly sought by collectors.

An inspection of the reverse is a good place to begin identifying premium examples. Strong details overall combined with bold lettering is an elusive coin to find. Lettering of ONE if raised from the field confirms a collector quality coin. 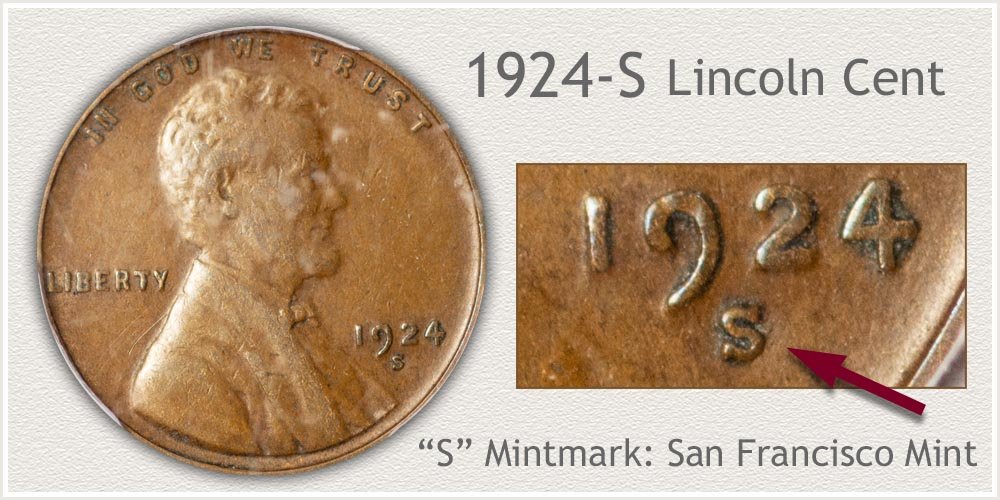 Another favorite with collectors, notice value in all grades. Rarity level increases in Extremely Fine grade, considered a Semi-Key at this level. A high-end coin in any grade displays lettering separated from the rim, inspect both obverse and reverse.

Eye appeal is a major contributor to value with the 1924-S cent. Age combined with heavy use over many years, result: few in nice condition. Viewing the coin overall, a circulated example with light to medium brown in even tones is well received by the market.

Handel your coins by the edges avoiding touching the surface. Copper picks up and reacts to most substances. From this point on you can assure preservation and maintaining value. 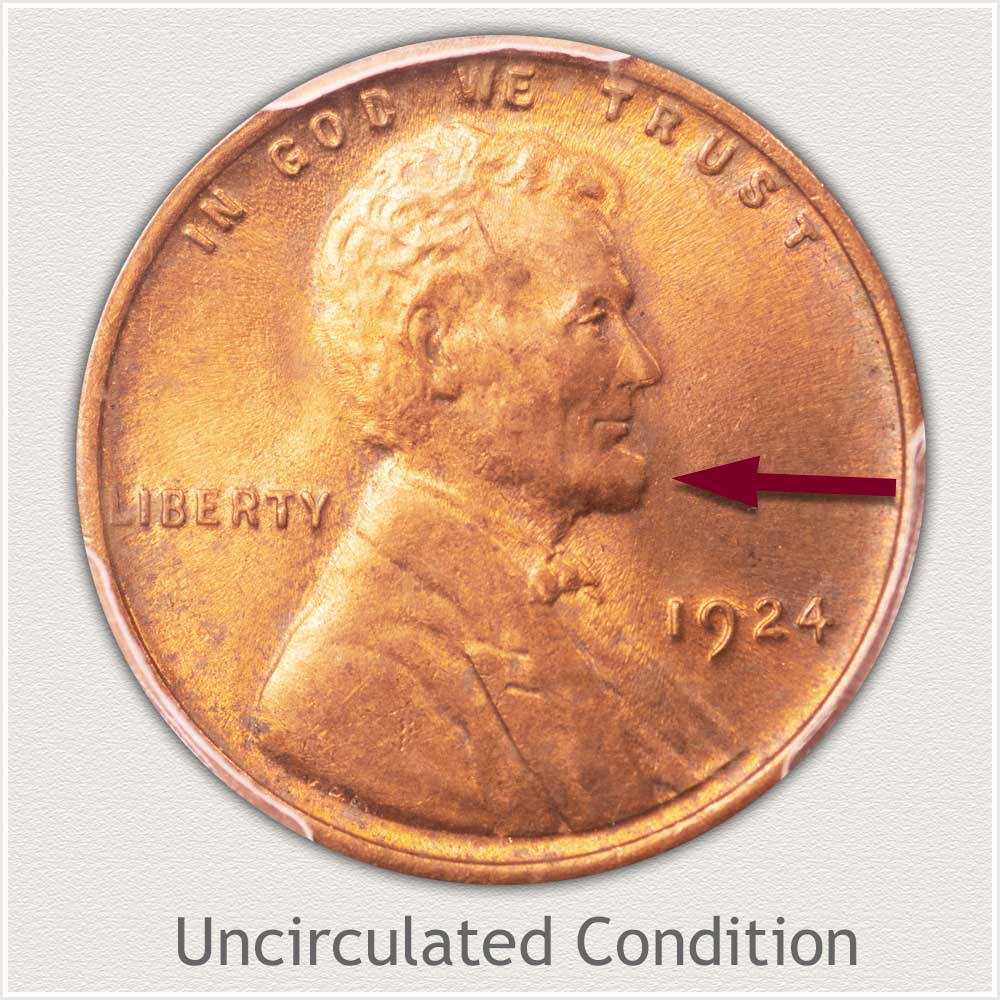 High areas are the focus of judging to determine a grade. Inspect Lincoln's chin to identify and smoothing of the surface. His chin and jaw are high in relief, any wear to the area would show as a dulling and flattening of the original texture. 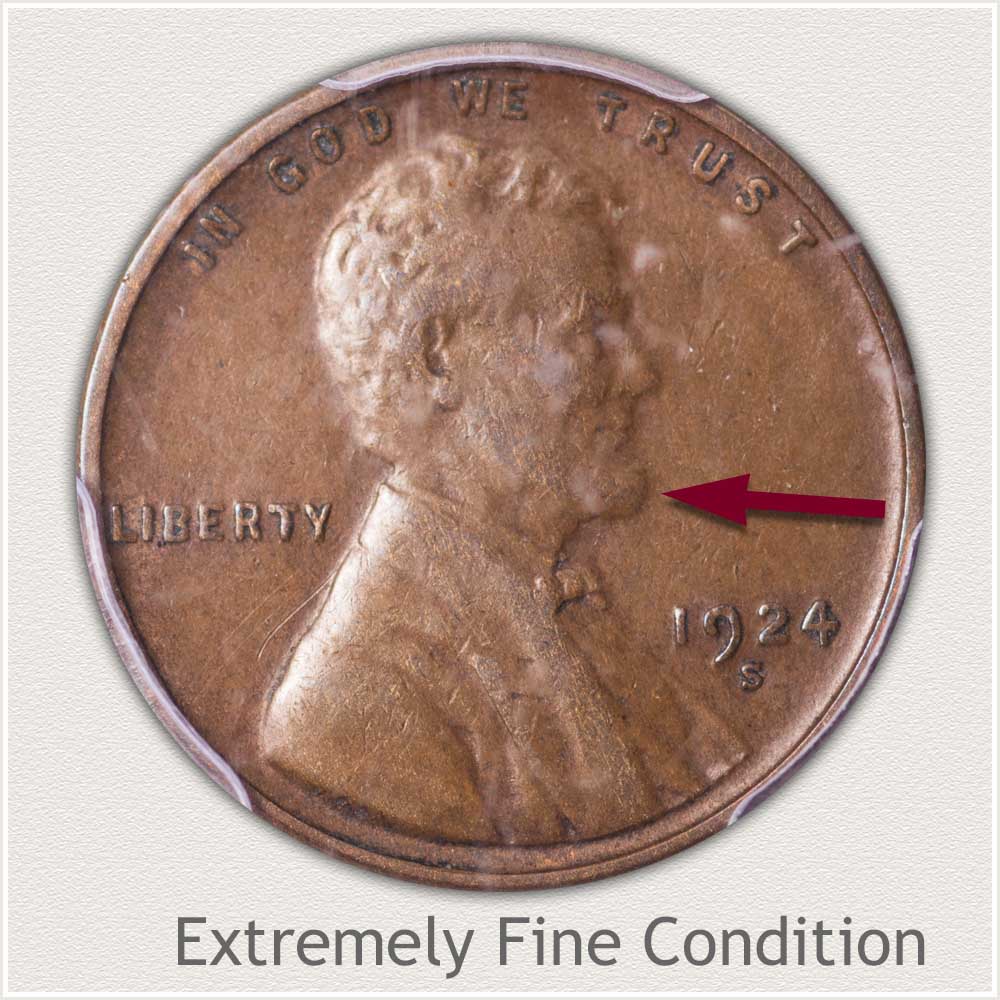 Down the center of the portrait is high in profile extending to Lincoln's chin. Wear on the chin remains light with minor flattening of the metal. A separation is noted from the chin to the jaw.

Bold devices, sharp legends, and a well raised date give this 1924-S penny a quality sought by collectors. Early year wheat pennies, those minted from 1909 through 1933 have a strong collector base. A pleasing circulated example fits nicely into collections. 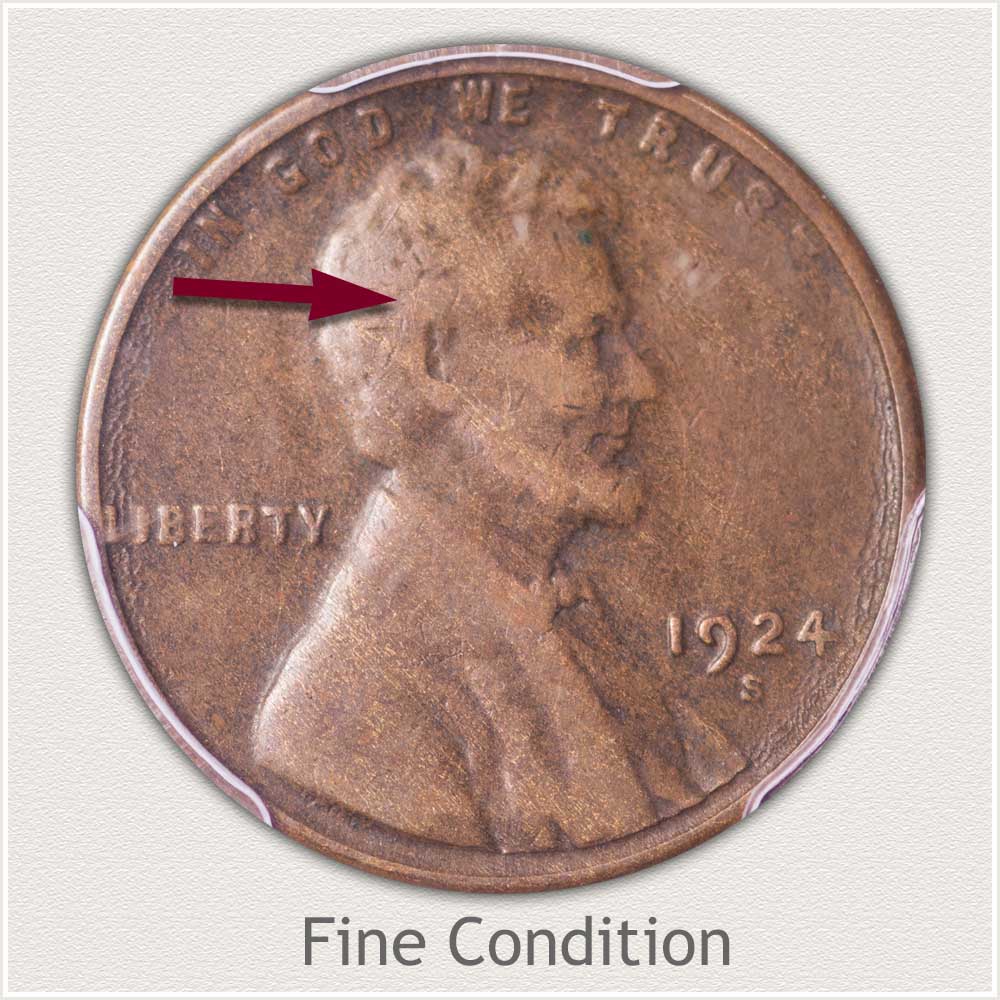 Fine Grade: Circulation wear is noticeable and areas of flattening are moderate in the Fine grade. Important is a clear separation of major features. High points are smoothed in the hair and face but all are clear.

Extending along the jaw line to chin, a small flattening to the rounded contour is confined to just the highest points. Lincoln's chin is recognizable.

Soft brown toning offset by deeper shades in the fields and lower areas of design lend a pleasing look to the example 1924-S penny. Remaining details are highlighted by the two-tone coloration. 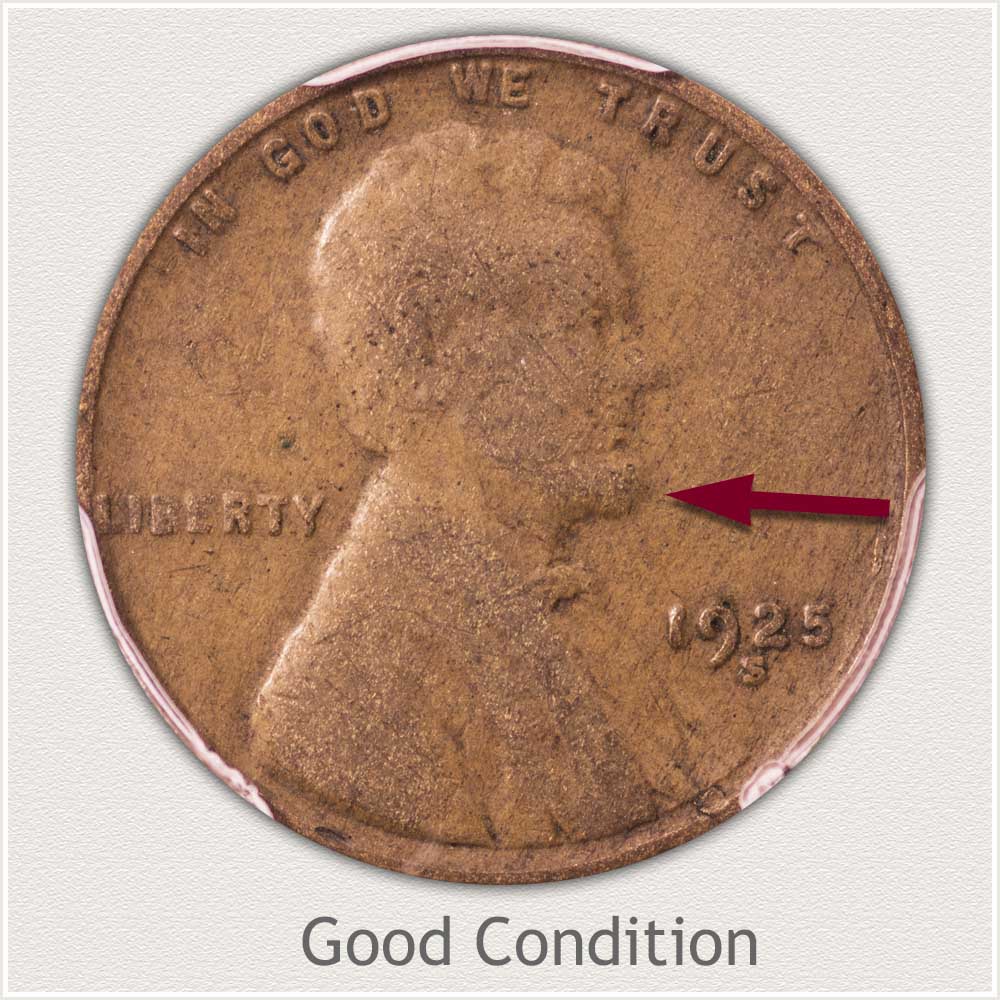 Good Grade: A typical wheat penny in Good grade is worn to the state of complete smoothness of all major features. Face and hair are one flat plane, Lincoln's coat is mostly merged with his shirt.

A close-up inspection of Lincoln's jaw shows little separation from the rest of his face. A slight separation remains defining the jaw from neck line. His chin is well raised from the field but is level with cheek.

A wheat cent in good grade often suffers from major distractions. Nicks and discoloration are among the main causes lowering the appeal of a heavily worn coin. Collectors take into consideration overall eye appeal when judging a candidate to add to a collection. Even toning over a mark-free surface is solid for the grade.

A 1924 Denver penny is an in-demand date and mint variety. Combined low mintage and age, it comes with a built-in special quality. 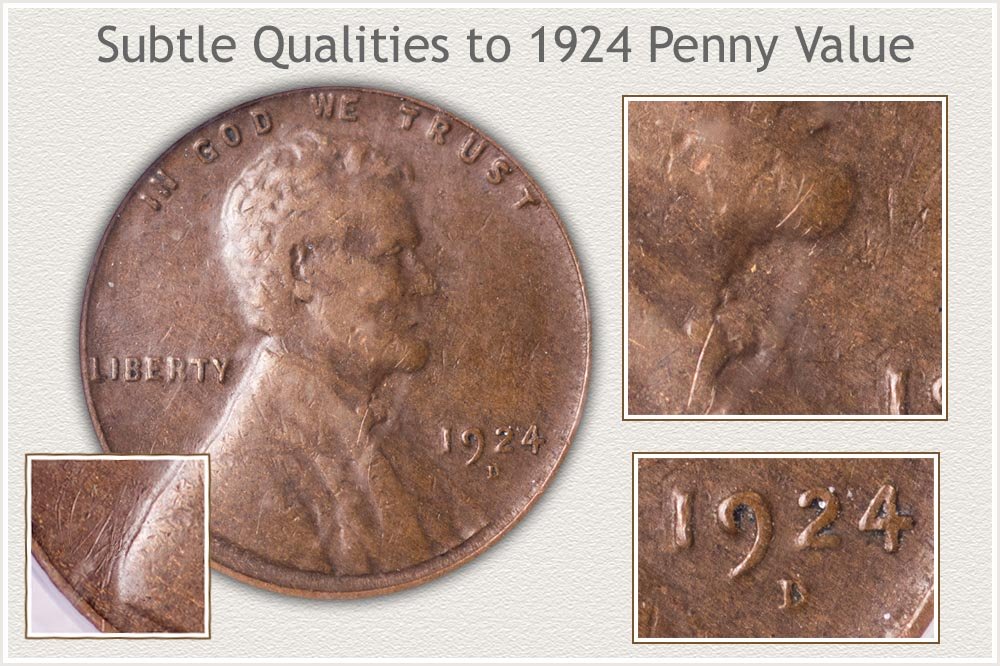 The example penny is a nice overall looking coin. Technical grade of Fine places it in an attractive value range. An exciting find to new and beginning collectors, adding a scarce coin, one of the keys to the series in their collections.

A pleasing, natural toning covers the surface with lighter shades highlighting features. No dark spots are noted. As a collector, when this coin is studied closely as a potential date and mint set addition, a few subtle distractions are visible.

Minor surface and striking qualities are somewhat limiting its appeal.

A dilemma now faces a collector. Pass and search further or forgive these small and minor faults, persuaded with a reduction in cost. Value of the coin is now determined by acceptable eye appeal.