Locate the correct position on the chart finding 1944 penny value. Identify Date and Mint Marks first. Next, judge condition of the coin. Collectors and dealers use a process of identifying and confirming: Date | Mint Mark | Condition

Important to evaluating how much a coin is worth follows this step by step method.

Mint marks create varieties of 1944 wheat pennies, each collected and valued separately. Closely followed by condition of the coin.

Begin evaluating your coin and finalizing value by confirming its Date: Dates are a main focus in collecting coins. Each is unique in scarcity, popularity and desirability.

Step Three: Complete a Judgement of Condition: Viewing the chart, condition plays an important role in scarcity and value. Wheat cents of 1944 are worth a premium in above average condition. Images in the grading section are used to recognize a close match and complete the grading process.

Collectors include all three varieties of 1944 wheat pennies in their collections. Demand for each is steady. A value difference is found in the San Francisco cent and condition. The largest number of wheats cent was minted in 1944 for the whole series. Total of all varieties: 2,148,738,000. 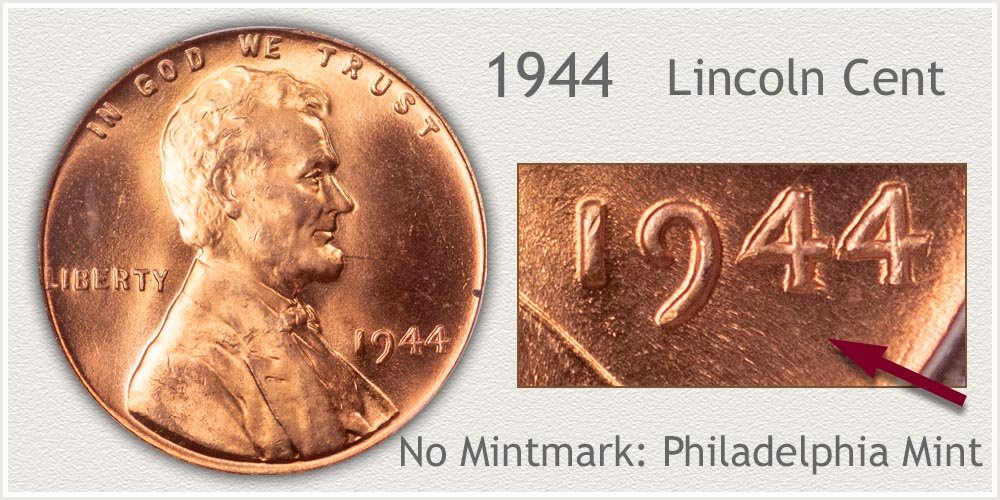 The Philadelphia 1944 wheat penny accounts for over half of the record-breaking number of cents produced that year. It is the first time any coin topped the 1 Billion mark. 1,435,400,000 wheat pennies struck at the Philadelphia mint.

With the highest number coined in all the wheat design series, 1944 cents are Abundant on a rarity scale. A continued demand is focused on higher grade examples with sharp details. 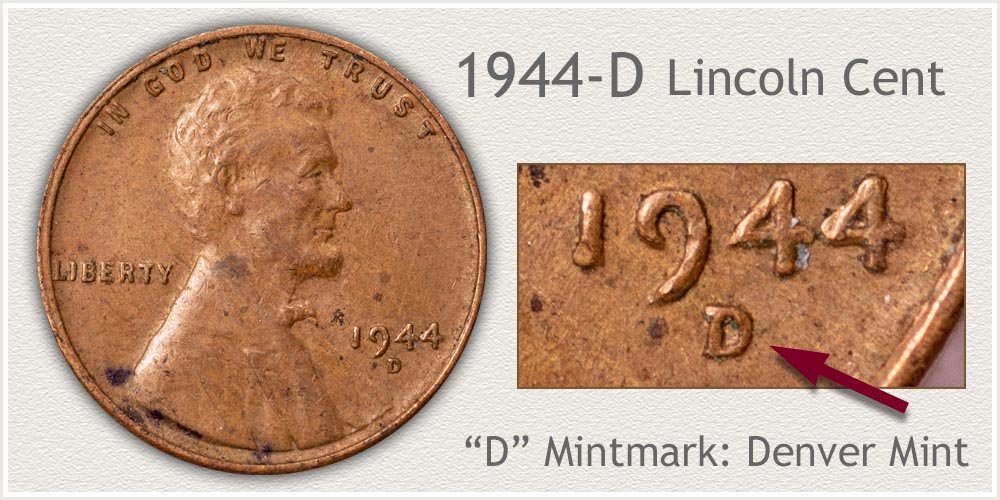 Set aside any examples showing fine detail of wheat lines to the reverse design. Abundant supplies consist of many well-worn examples. An affordable grade included in a collection is Extremely Fine, with a strong demand. 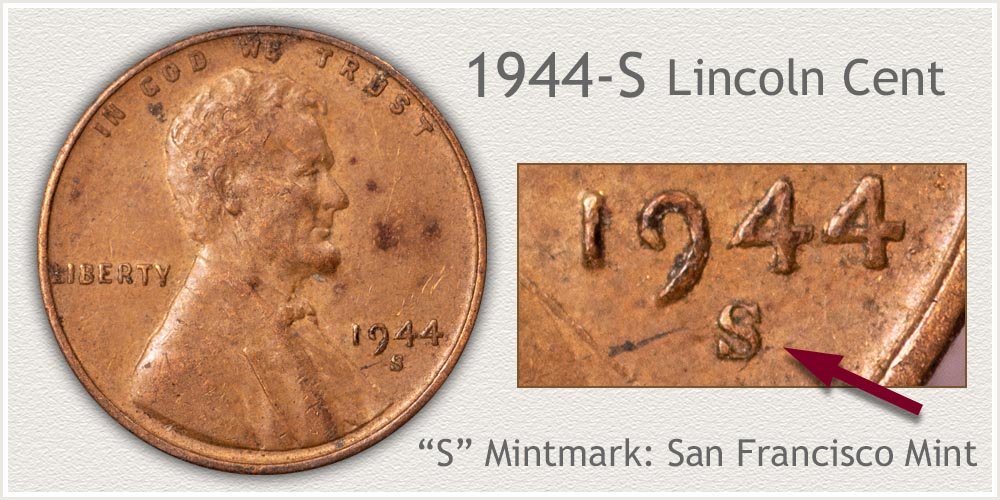 The largest number of San Francisco cents were struck in 1944, a record for the entire series. 282,760,000 pennies. Ever popular with collectors, demand is enough to show a slight premium.

Bold details, describes any 1944-S preferred by collectors. View all lettering along rims of both sides. A clear separation of letters from the rim is sought. Subtle curving of letters upwards onto the rim indicated a lesser quality strike.

Minimum value of wheat pennies is further refined by condition of the coin. Preservation of devices, legends, and fields are inspected as to condition. Lincoln's portrait is high in profile and subject to wear. Stages of wear are identified and a grade is determined.

When viewing your coin in the grading process, use a single light source. Hold the coin a small distance from a 100-watt light and tilt at a shallow angle brings out subtle details. 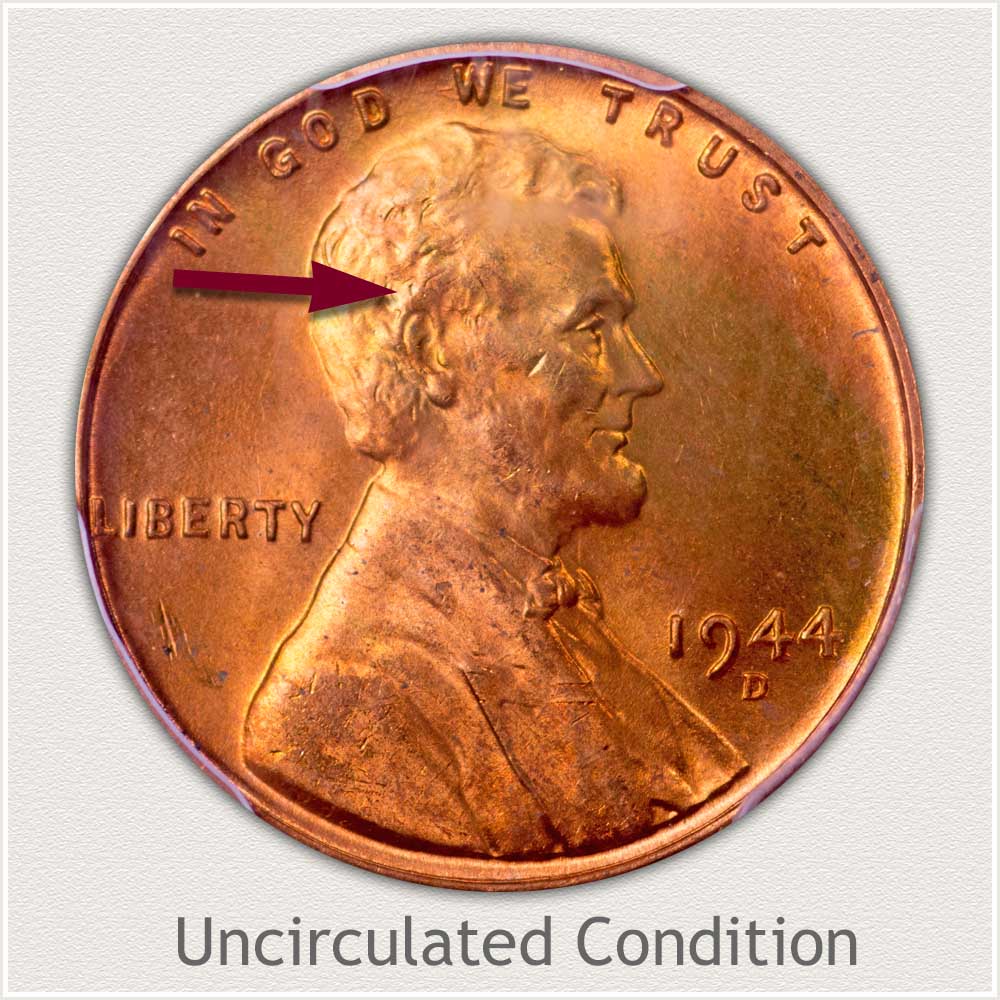 Uncirculated Grade: Uncirculated wheat cents are special because of completeness of original details. These coins never circulated and received no wear to the surface. Often preserved with bright luster, mint state pennies are a collector favorite and valued highly.

One of the first areas on the coin to evidence wear is Lincoln's ear and surrounding hair. High in relief, the ear remains without any smoothing to original mint luster and texture. Tilt the coin to follow a complete band of mint brightness across both the ear and temple.

On this example 1944-D penny bright luster remains over the majority of the surface. Normal deepening of color is found in the higher areas of design, notably Lincoln's coat.

Colors of Mint State Grade Wheat Penny Color of a newly minted wheat penny - a bright red-gold - changes over time. Shades of brown develop and lays on top of the surface, toning a coin. This toning is not used as an indication of wear. Actual wear - removal of metal lowers grade.

Lincoln's ear is still without any wear on all examples. The moderately toned cent is well struck and ear is complete. Looking closely at the toned 1945 cent no flatting and disturbance of metal is evident on high areas of his ear. 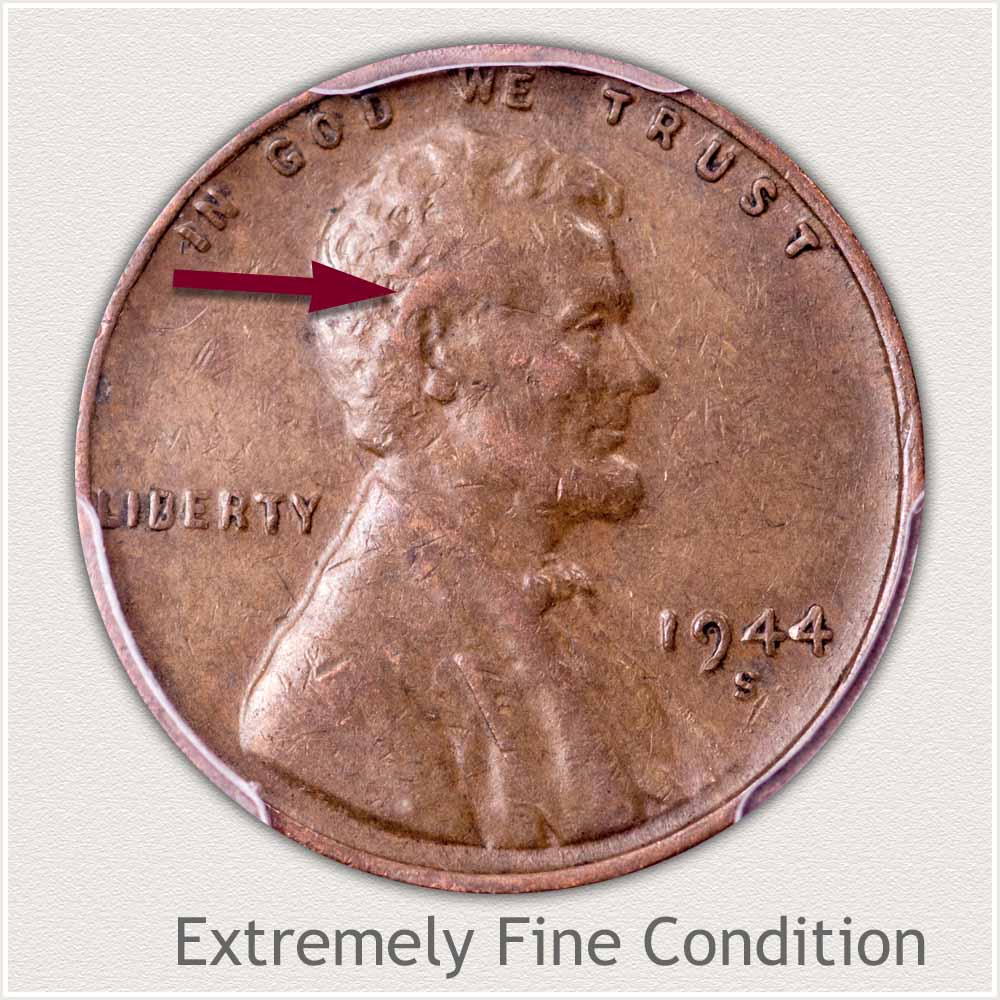 Extremely Fine Grade: A small amount of circulation wear is evident on a coin grading Extremely Fine. Light wear is the key to identifying wheat pennies in extremely fine grade.

Lincoln's ear and the hair just above is a very high point of the design. Any wear occurs on the hair detail lowering its profile. A small flat spot just connecting the ear and hair is evident. Wear continues forward of the ear and is smoothing the contours of the temple just slightly.

Overall the appearance of a coin in extremely fine grade is a sharply defined wheat cent. A soft brown toning of the copper lends to a nice eye appeal. Details of the legend are crisp as well as date and mintmarks. 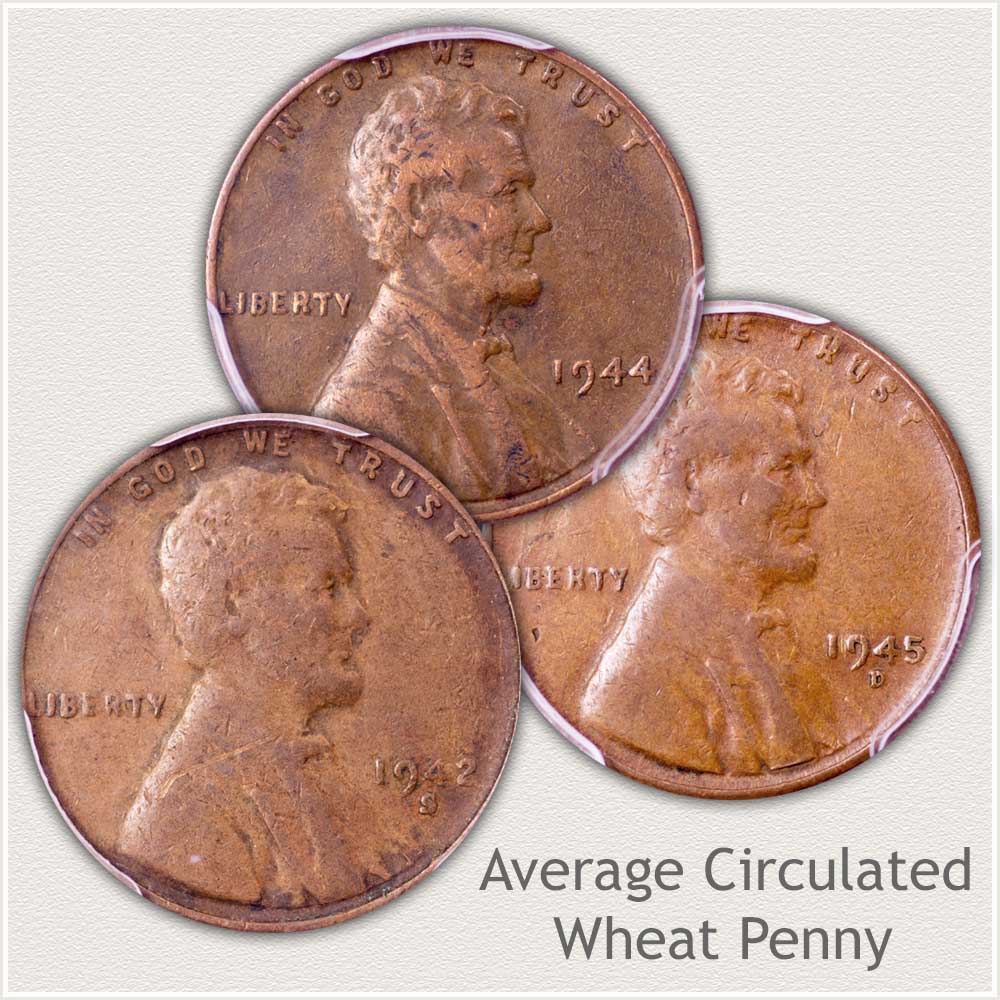 Average Circulated Condition: Collectors consider a wheat penny with moderate to heavy wear as grading in Fine or lower condition. 1944 penny value in this grading range is found among beginning and young collectors. These coins are an affordable collection of an old obsolete series.

Wear has begun to merge the higher areas of the design. Lincoln's hair shows smoothing and blending in areas. A good indication of coins below the extremely fine grade is large flat spots on the cheek below the eye and jaw line extending to chin.

Collectability and eye appeal is important to value. Strong lettering remains on the example wheat pennies. Discoloration is absent and the surface of the coins are medium toned.

An average circulated 1944 penny is an available coin in terms of scarcity. It marks the first time any US coin exceeded 1 billion pieces. What makes the imaged cent special is the two curved missing portions. 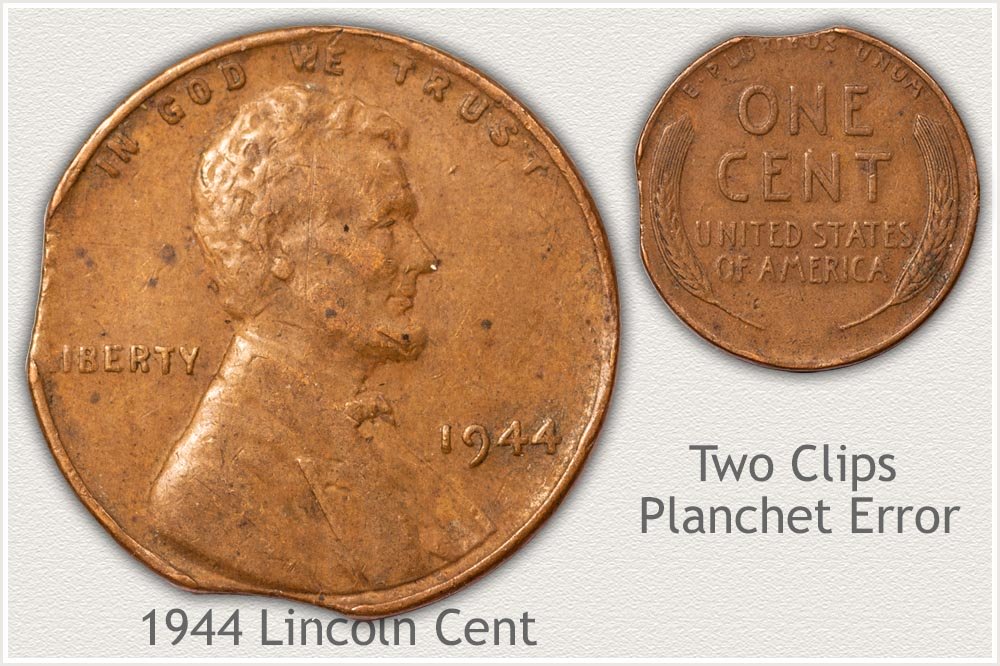 High speed punching of coin blanks resulted in a slight misalignment with this planchet being punched from an area to close to previous punches. A clipped-planchet error was created.

After punched as a blank it received a rim at the upsetting mill and then to coining presses becoming a 1944 penny.

Value of these clipped planchet errors is dependent on amount of metal removed and overall condition of the coin. A plus is a clear date and portrait of Lincoln. Small clipped areas add a few dollars in value. A less encountered error is a coin with two clips. Added interest of two clips increases premium.

Error coins when combined with traditional date and mintmark sets offer a depth to the collection. A visible error, clipped planchets become an interesting specialized set.