How to determine 1912 penny value.

Completing the value process of coins includes identifying the date and mintmark combination and judgement of condition. Scale of value depends on availability of the coins. In general, most early Lincoln cents, those dated 1909-1933 are found well worn.

Any 1912 cent in nice, lightly worn condition is a scarce coin. Helped in part by low original mintage numbers, Denver and San Francisco cents in high condition are desirable to collectors.

Compare your coin to the date and mintmark images to confirm the first part of the value process. Secondly, grade condition by confirming a similar appearance of your coin to the grading image.

1912 Wheat cents, as a group are an infrequent coin to encounter. 1912 represents the 10th lowest combined mintage of all varieties. Philadelphia, Denver and San Francisco minted a total of 82,992,900 cents that year. Almost 83 million cents is a large number until compared to one hundred years later. 2012 mintage of cents totaled just over 12 Billion coins. 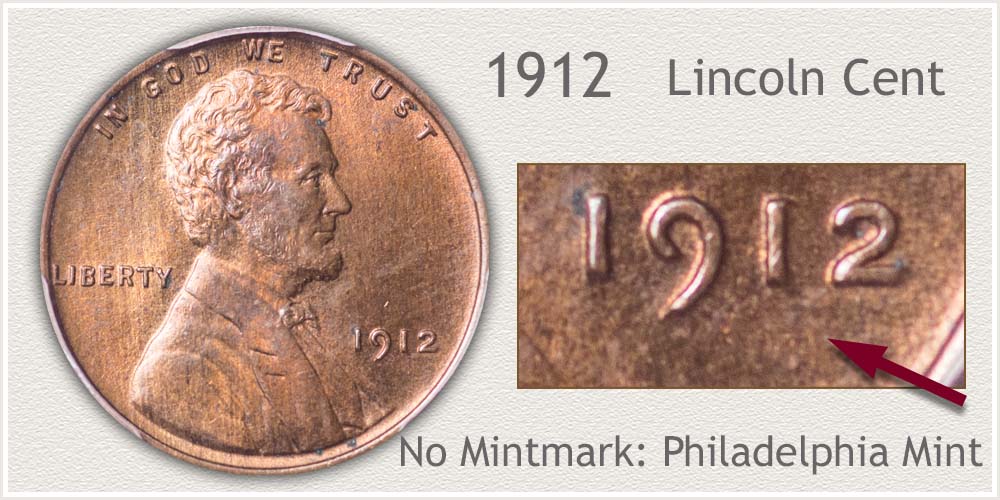 Pleasing examples are well received in the collecting hobby. These old pennies circulated widely at the time and many simply wore out. Value discovery is the Extremely Fine grade and above.

A lightly circulated coin with bold features to Lincoln's coat and separation of the bowtie is an exception. Overall 1912 Philadelphia cents are somewhat abundant, except in higher grades. 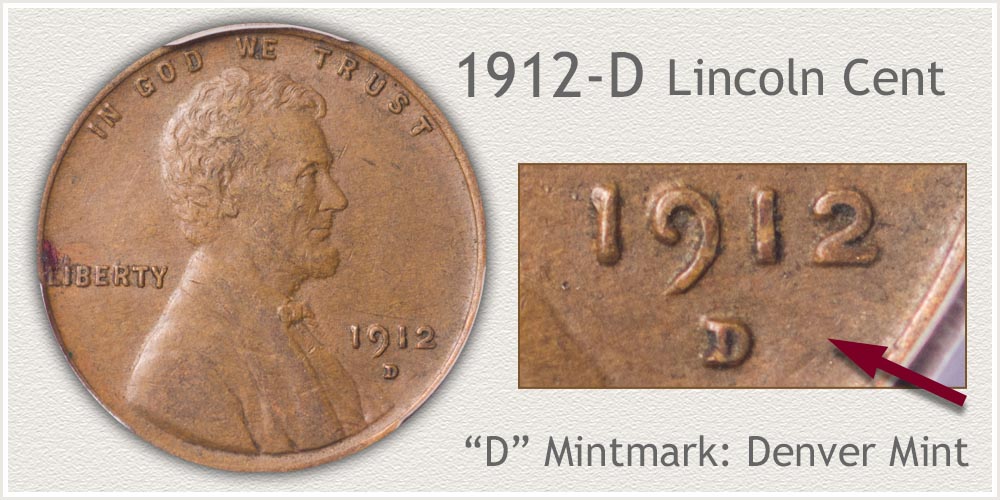 Denver mint variety is a somewhat elusive coin to find with pleasing eye appeal. Value starts off strong in Good condition. A young collector would treasure such a coin. Grading becomes important if a noticeable sharpness is found in Lincoln's hair and beard. Grading is covered in detail in the next step.

Alert - Altered Date: Transforming a 1944-D to pose as a 1912-D required removing part of the "4" in the date. However, with part of the "4" removed it leaves an uneven look to the spacing. 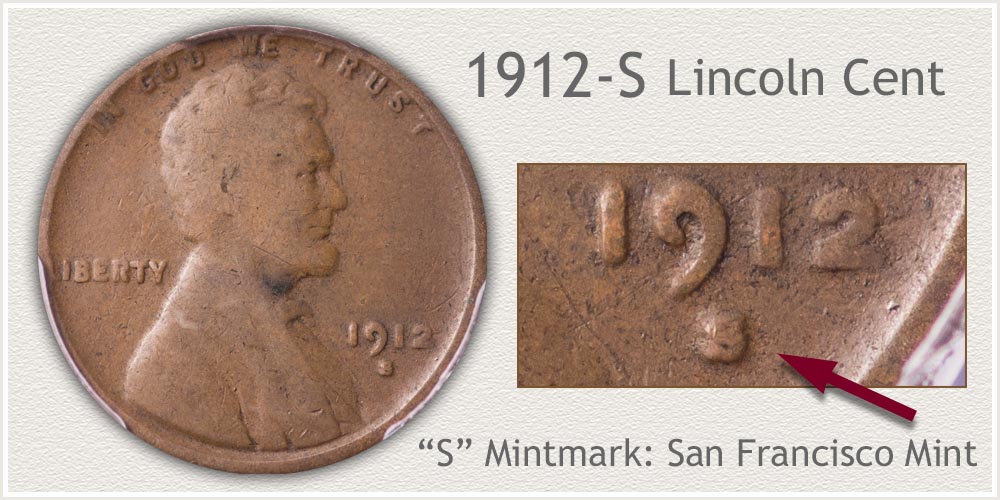 Scarce in all grades, 1912-S rarity level is Semi-Key. Contributing to it scarceness is its ranking of 8th lowest mintage of all Lincoln wheat cents. 4,431, 000 total minted.

Collectors of all ages appreciate the rarity of these San Francisco cents. High end grade examples are expensive and appeal to advanced collectors. Lower grade examples, still nice in appearance are excellent choices to own a scarce coin.

Alert - Altered Date: A 1944-S provides an opportunity to create a mock 1912-S. Filing away the left side of the "4" has been attempted to create the "1" of the 1912 date. Inspect closely; a wider space is noticeable separating the numbers on an altered date.

Grading a coin involves judging condition of the devices, legend, and fields against a standard for the grade. Images are compared to your coin helping visualize differences in amount of wear the surface.

Examine coins under a single light source during the grading process. A 100 watt incandesce bulb provides ample light to bring out subtle detail. 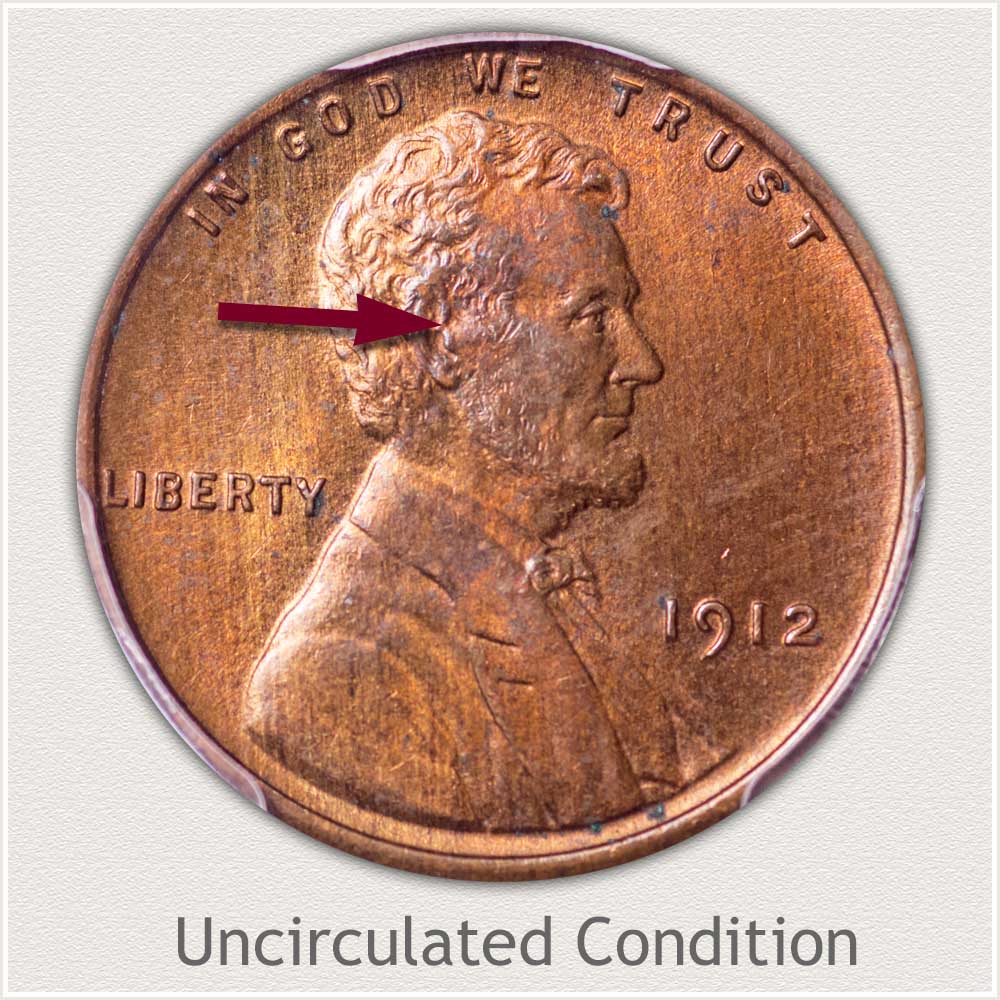 Uncirculated Grade: An uncirculated grade Lincoln penny never entered circulation. Issued from the mint to the banking institutions and saved at that point. No wear to the surface defines the mint state grade.

High points of the design are examined for traces of wear. Lincoln's cheek just below the eye and extending to his ear is prominent, subject to first contact. A mint state example is covered with mint luster. Because of its central location on the coin, his cheek would wear quickly. Examine for any smoothing of the surface, a change of texture from surrounding areas, indicating wear.

Mint luster is the initial shine of a new minted copper coin. Delicate in nature and since it is copper, prone to change from bright red-yellow to shades of tan and brown. A change of color is expected and does not indicate wear. Original texture of the metal is evident below any toning on an uncirculated wheat cent. 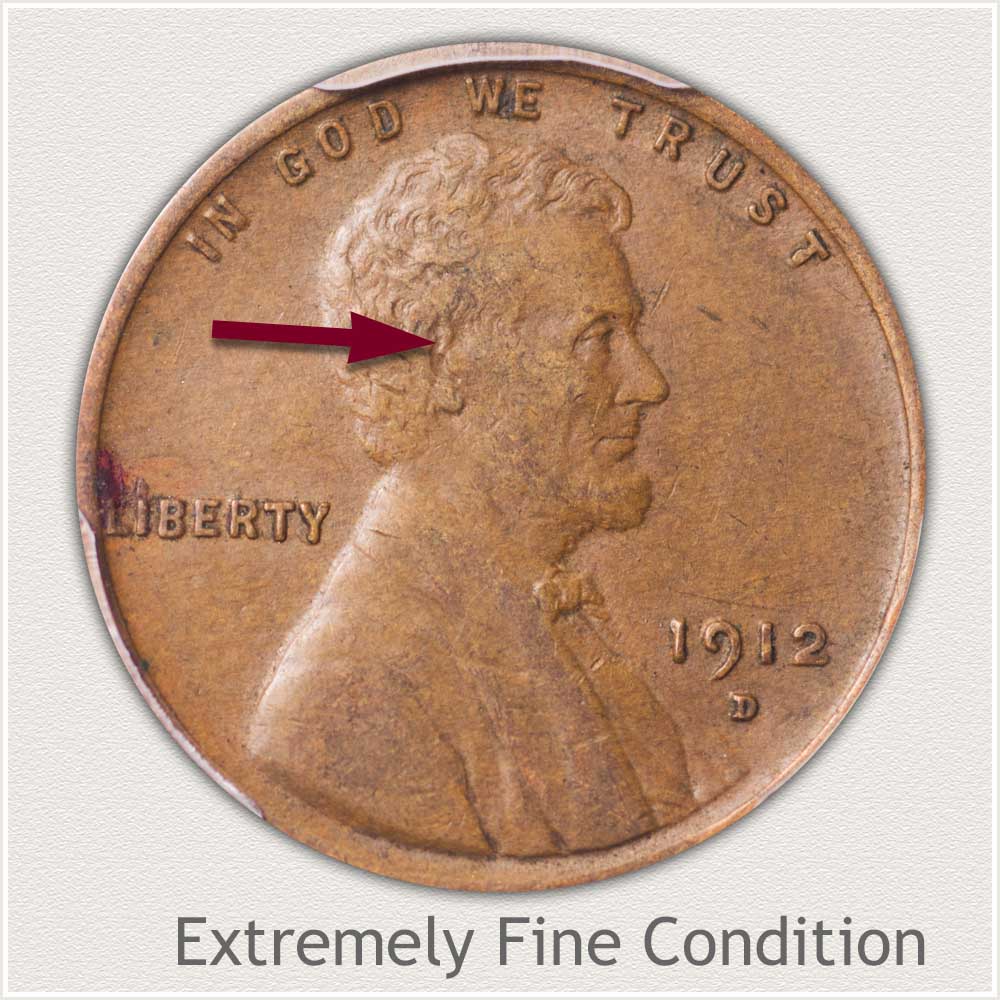 Extremely Fine Grade: A short time in use has removed a small amount of metal from an extremely fine grade wheat cent. Light wear evident defines the grade.

Lincoln's cheek remains well detailed, rounded in profile and well raised. A clear separation from the ear is seen with flatness to the cheek confined to just the uppermost areas.

Early cents in extremely fine grade are sought by collectors. This 1912-D example is notable for nice mark free surfaces. Heavy nicks are absent giving a crisp look to the coin. 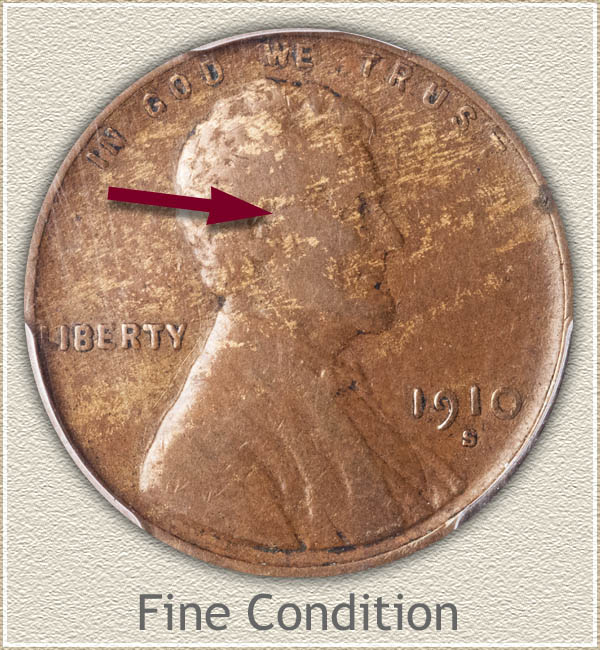 Fine Grade: Moderate to heavy wear defines a Lincoln cent in fine grade. Wear is seen on all areas of devices and lettering. Major details are worn but remain visible. Lincoln's coat is separated from his shirt.

The area of cheek just below the eye is now very flattened. One continuous area extends to his ear from the eye. Keeping the coin in the fine grade is a separation from the cheek to lower jaw with a shallow depression remaining between them.

An incomplete mixing of metal alloys shows itself in this example 1910 cent. Lighter shades stippling across the surface is considered when judging eye appeal. A collector's personal preference either raises or lowers desirability and value. 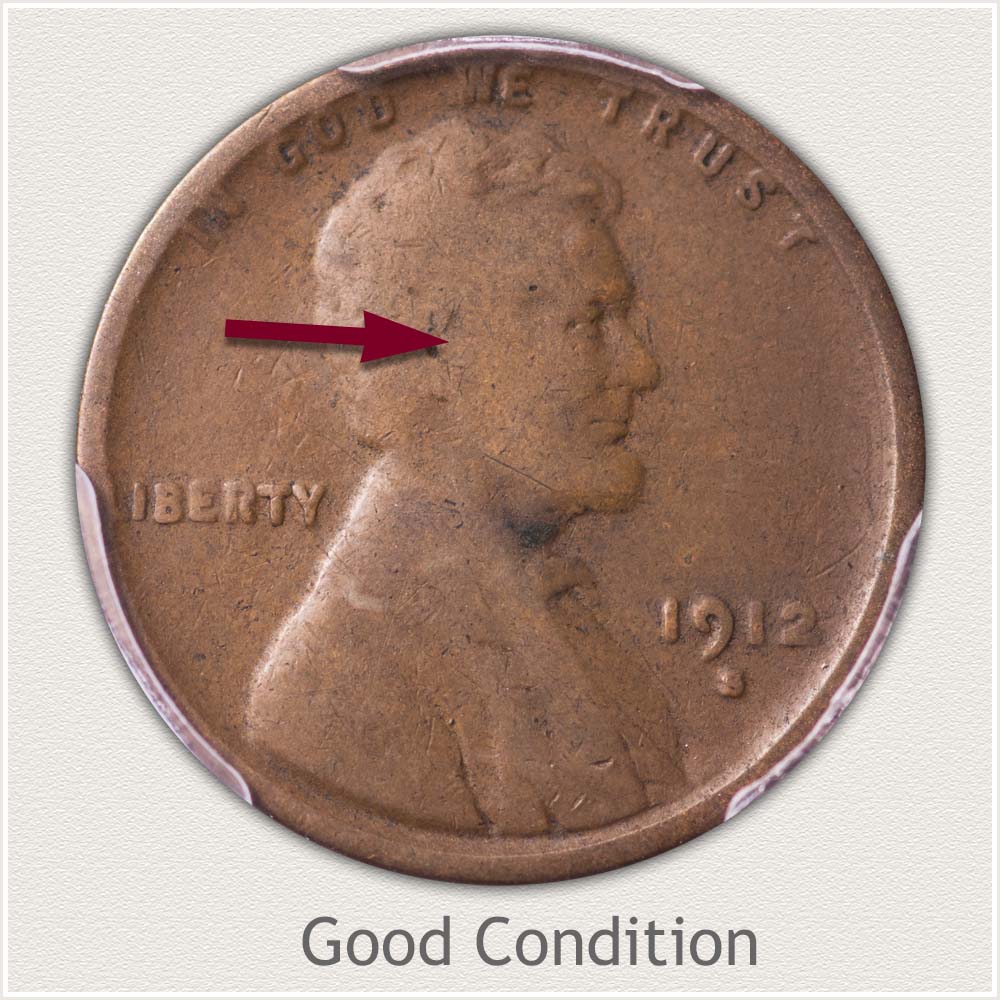 A once high in profile cheek is now smooth and extends into the ear. All raised metal is now level with Lincoln's eye and hair. Slight texture remains in his hair and a faint line separates jaw from neck.

No major marks are seen on the portrait and fields of the coin. Color is a warm brown with a slightly lighter shade to the bust of Lincoln.

Eye appeal of a wheat penny is one of the main factor's collectors consider. When viewing and searching to add a coin to their collection some coins stand out as pleasing. Circulated early year cents are affordable, ones with eye appeal are easily marketable.

Finding nice circulated coins are somewhat elusive. Copper is prone to develop very dark colors over time. In many instances toning is uneven and splotchy. Chemically active, copper reacts quickly with many elements. Verdigris is the green corrosion showing in the example surrounding the lettering. It is an indication the surface of the coin is degraded and pitted. All of these lower eye appeal.

A collector market is strong for coins with high eye appeal. Avoiding many of the faults common to copper coins is a very big plus adding value. 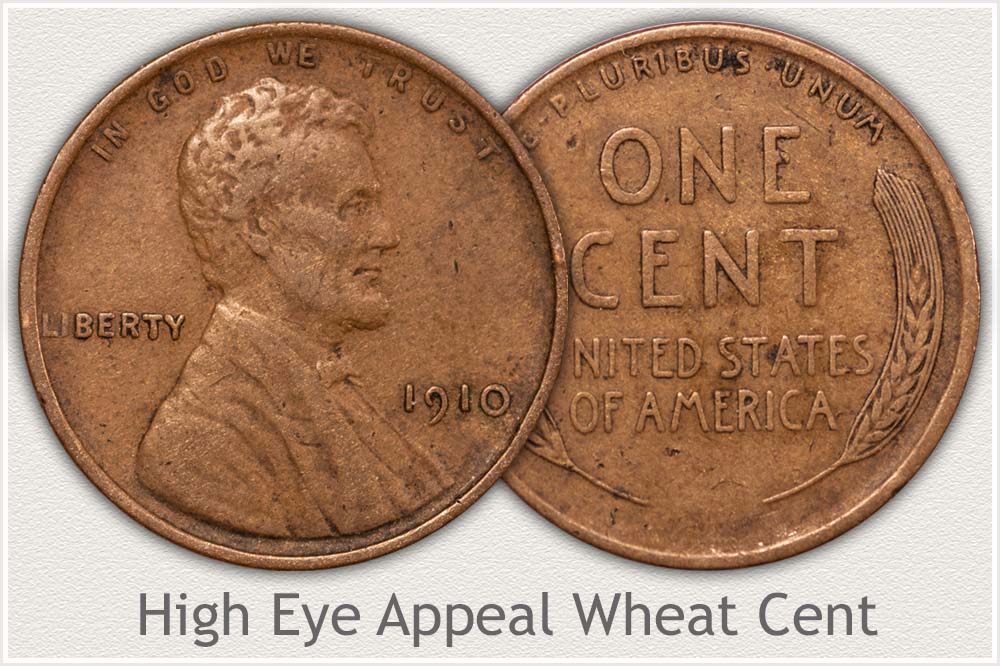 Imaged is an old wheat penny showing a moderate amount of wear. A coin in this condition is affordable, representing the early 1909-1933 era. Eye appeal is strong. Wear is evenly distributed; toning is light brown with deeper shades in the recesses highlighting the design. Absent are noticeable marks. Marketability is high.

Combine technical grading of condition with judging overall eye appeal when considering a solid value to place on your coins.