How to accurately judge 1909 Lincoln penny value. Lincoln wheat cents are very popular with collectors and inspected closely to judge how much they are worth.

Popularity of collecting Lincoln Wheat cents is the driving force behind values. A focus on each of the dates, along with the mint that struck the coin is typically how they are assembled into a collection. 1909 is significant and prized as the introduction year of the Lincoln design.

Listings on the chart also separate values by the condition of the coin. Key elements found and displayed on the coin's surface are inspected and judged to determine a grade. This step is not as daunting as it may seem. Comparing your coin to images of the different grades gives a good indication to condition.

Value in Mintmarks - Identify Your Coin's Listing on the Chart

1909 saw four variations involving a combination of mintmark and the designer's initials. Victor D. Brenner designed the Lincoln cent and when first minted his initials V.D.B. were placed on the reverse design. Later removal of the initials in 1909 caused varieties of with and with-out these initials.

Careful recognition of the exact variation is needed. Value differences are quite large.

First minting of 1909 showed the initials V.D.B. placed on the reverse at the bottom close to the rim. A very collectible and desirable coin both in the past and today. Because of its "first of year" status many were saved. An affordable iconic year and design.

These were the first Lincoln pennies struck at San Francisco and are notable for the V.D.B. at the lower rim. Production numbers were small and the coins soon became highly sought. Today it is considered a major key date and mint to the series and is collectible in all grades.

Grading the condition is very important. Since values are high, having these authenticated by one of the top Coin Grading Services is routine. Assurance of both authenticity and grade solidifies value.

Removal of the initials from the reverse created a third variety of 1909 penny. Millions were struck and many were saved. Values begin to increase in the higher grades, judgement of condition using the grading images below helps determine worth.

Identity of this variety is the absence of the V.D.B. initials on the reverse. Also considered a key to the series because of a relatively low mintage number. Collectors value the coin highly in all grades and nicer condition coins are well received.

An extra moment or two judging condition is needed to arrive at it true worth. Value and the fact that altered coins are known requires authentication. Coin Grading Services, both authenticate and grade providing assurance and accurate determination of condition.

Value differences listed on the chart reflect the condition - grade of the coin. Amount of wear to the surface is judged and compared to images and descriptions.

Best approach to grading is review the image of an uncirculated coin first. Identifying the depth of the design, knowing the high and low areas, helps in determining degrees of wear. 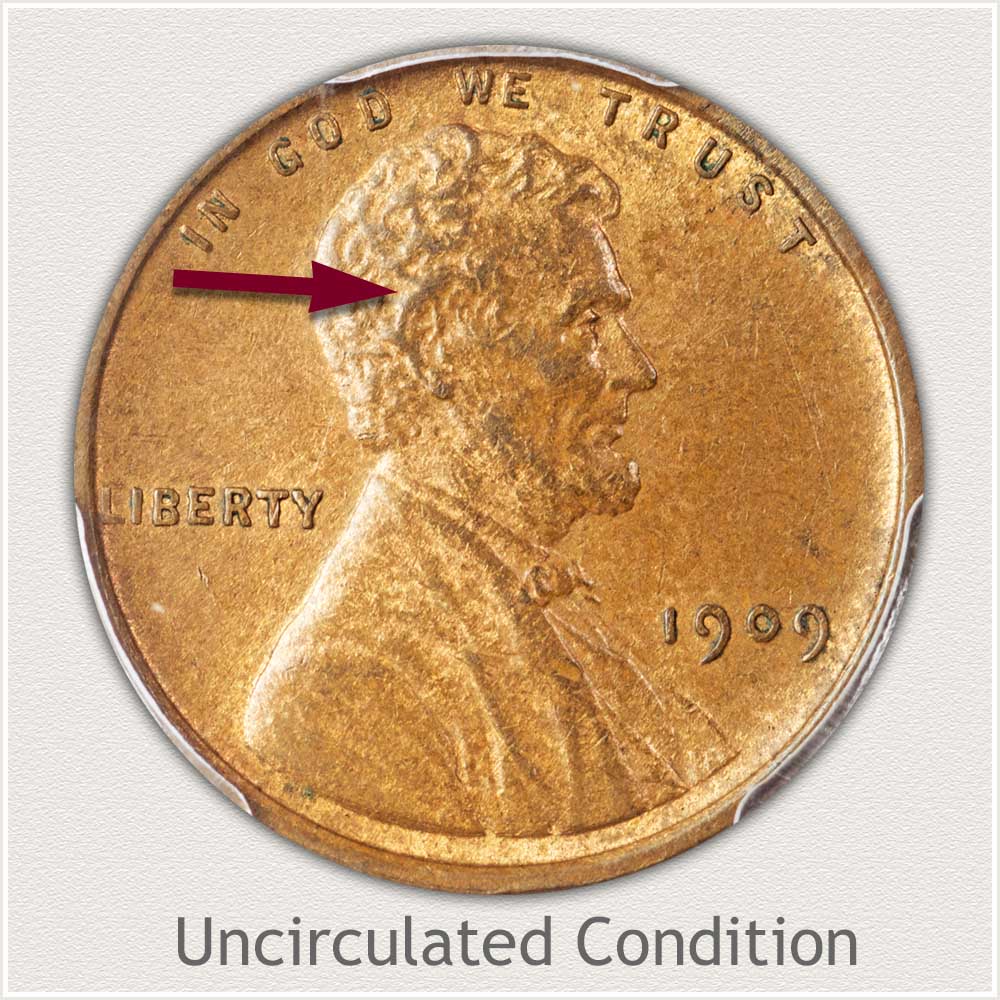 Uncirculated Condition: A coin with no wear to the surface is graded as "uncirculated". These coins are at the top of the collectible and value scale.

Look closely at the hair just above the ear of Lincoln. A small tuft of hair curls over and just covers the very top of the ear. An uncirculated coin displays the curl with a rounded profile and clearly separated and raised from the forehead. Any wear shows as a flattening and smoothing effect. 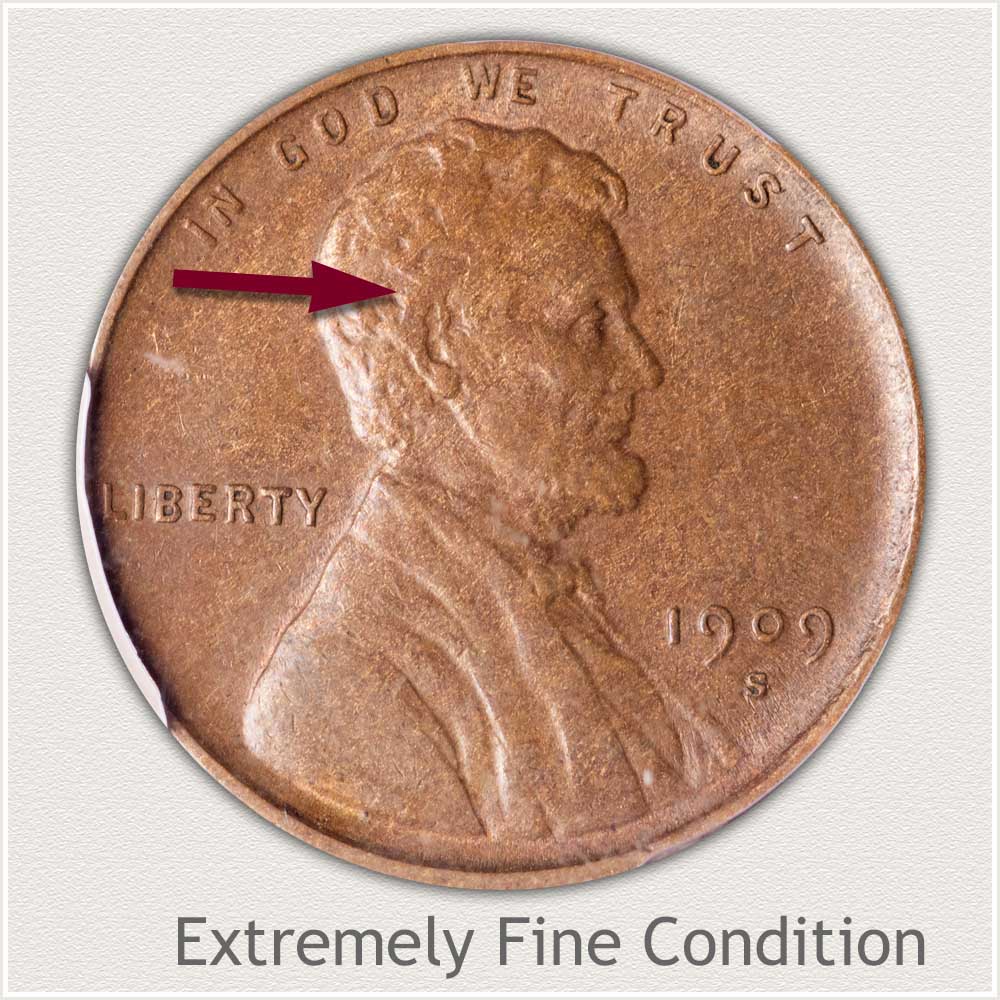 Extremely Fine Condition: A small amount of wear scattered over the high points of the design identifies the grade.

A small curl of hair at the top of the ear now displays a minor but distinct flatness to its once rounded profile. In some instances, the curl has blended with the forehead. However, the curl is clearly separated from the larger curl of hair just above.

Other areas of the hair also are beginning to show evidence of minor flattening. Importantly, the majority of hair detail is well separated. 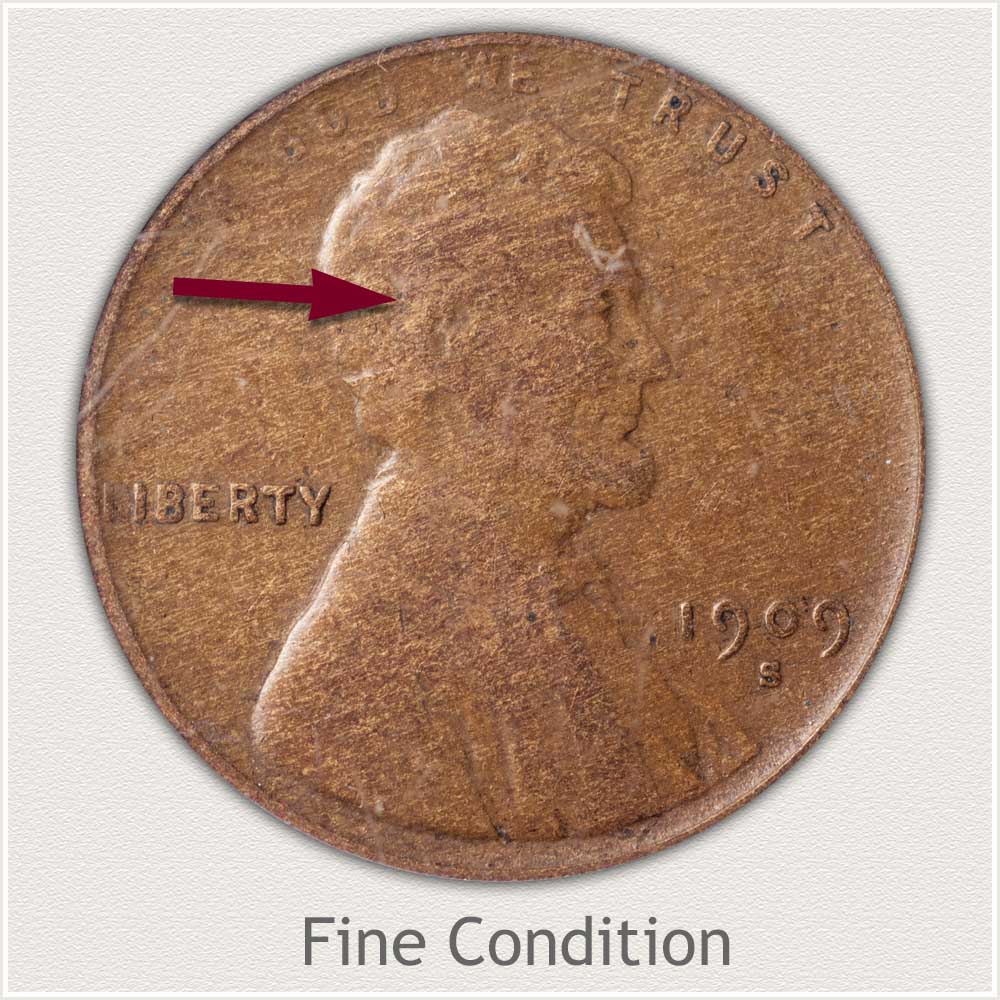 Fine Condition: Wear has caused many areas of Lincoln's design to become flattened.

Inspecting the curl of hair above the ear shows most of the detail is lost. Once separated, the curl is now worn smooth and connected to the surrounding areas. Notably, the curl is now merged with the forehead.

Despite loss of minor detail, overall many areas are defined and a certain "sharpness" is displayed. 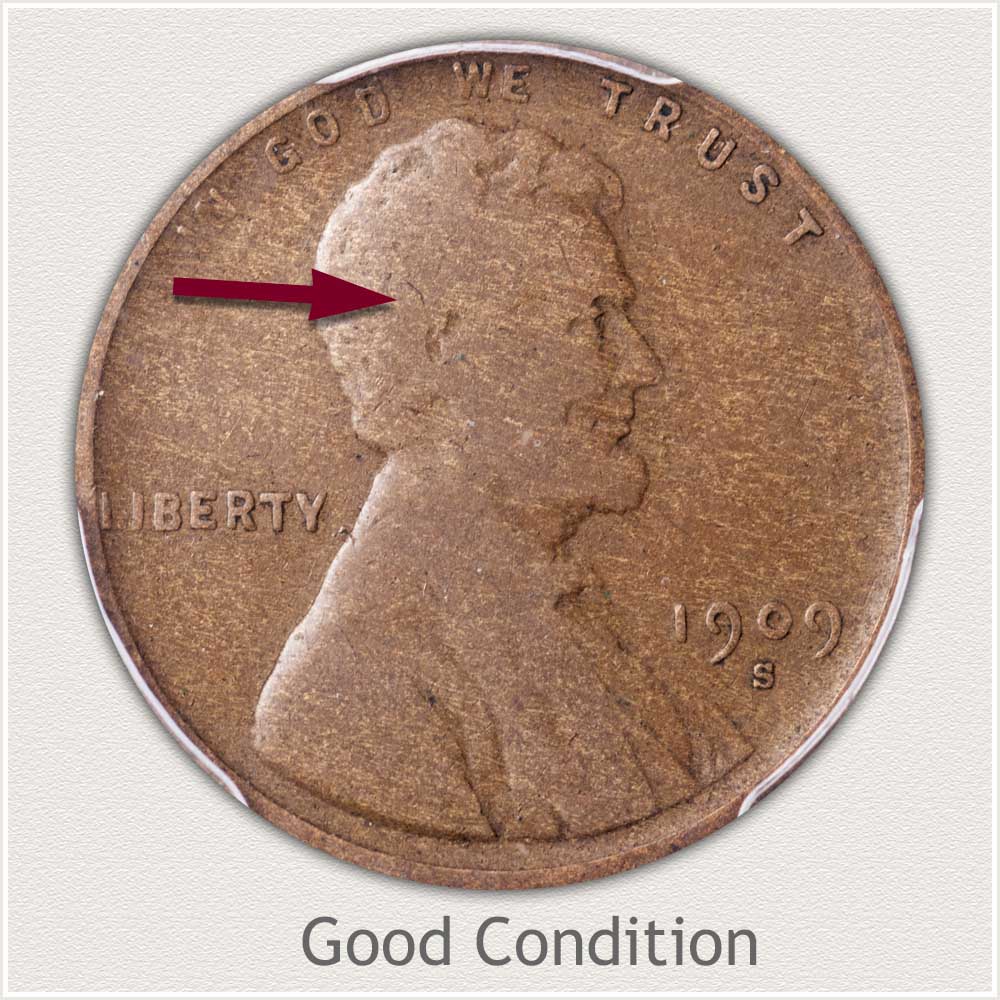 Good Condition: Heavy wear describes the "Good" grade. Most of the design elements to Lincoln's portrait are now worn smooth.

Defining the "Good" grade shows the coin has worn to the point hair detail surrounding the ear is missing. Now worn to a level plane, little remains of the hair with just the central portion of the ear showing any detail. On a positive note, due to the depth of the overall design, a clear outline of Lincoln is still bold. 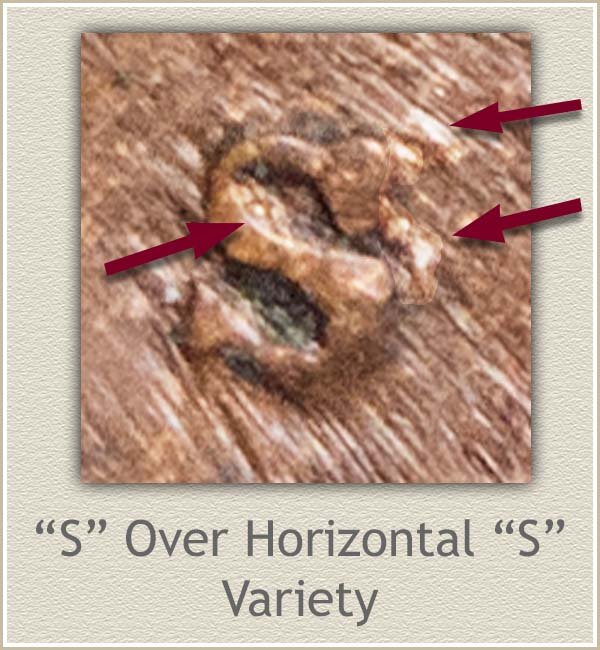 Variety and error collecting of Lincoln cents has become popular today. Many anomalies have occurred over time to the coins. One in particular has gained interest with the 1909 cent and is known as the "S Over Horizontal S" variety.

When punching the "S" mintmark to the working die, the first punching was orientated horizontally. A second punching of the "S" corrected the problem; however, an indication of the first "S" remains visible. Thus, creating a scarce "S" mint variety.

Look closely under magnification at the "S" mintmark of any 1909-S Lincoln cent. A faint impression of an underlying "S" mark is visible on a few minted. A 10% premium is placed on these in circulated grades. In the higher mint state grades, the premium is slightly less. 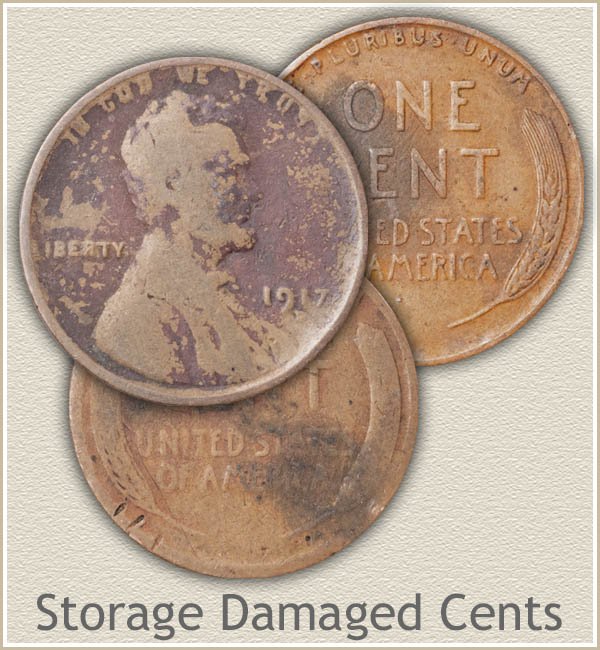 Minimum value of 1909 pennies along with their status as a sought-after collectible is best preserved by handling the coins gently. Hold by the edges and avoid touching the surface of the coin. Contact with other coins is also "detrimental" to their well-being. Additionally, moisture and humidity are particularly harmful and rapidly lowers the surface quality of copper coins.

A quick and temporary measure to separate coins individually is placing them in a small plastic bag. A note of caution: avoid wrapping coins in paper as it exposes them to chemicals that harm their surface. A longer-term solution to housing coins is using one of the many coin "flips" designed specifically for the purpose. For a detailed discussion see: Safe Coin Storage

US Treasury. Preparation of Working Dies https://www.treasury.gov/about/education/Pages/working-dies.aspx
US Mint. 1909 US Mint Report https://nnp.wustl.edu/library/publisherdetail/51