Confirm accurate 1917 penny value. Date of the coin is the first step in a process of judging how much it's worth. Two more factors play key roles, Mintmarks and Condition.

Mintmarks identify the mint that struck the coin. Condition is determined by comparing the preservation of your coin to the grading images to find a close match.

Described and imaged below, these are used to confirm the correct variety of your 1917 wheat penny.

Additionally, collectors rate the condition of coins through a grading process. Their desire with any collection is nice quality coins. 1917, one of the early years becomes elusive in grades above Fine condition. Grading is a must.

Many 1917 cents were produced, however most circulated and became worn to heavily worn. Today's challenge is finding coins with little to no wear. Demand from collectors is supporting nice premiums for better quality coins. 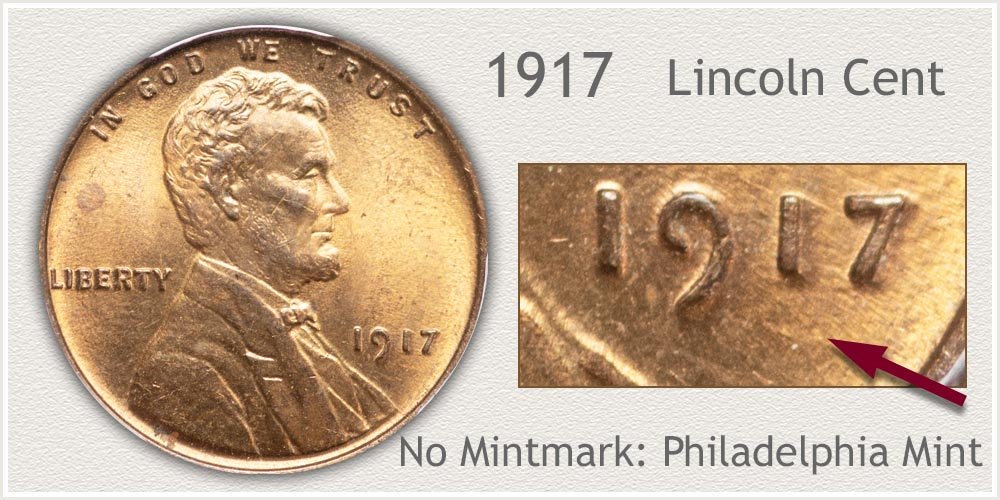 On a rarity scale 1917 wheat cents are Abundant. Philadelphia struck the highest mintage to date of 196,425,785 pieces. There is an increase in value for coins with just light circulation wear. To recognize these nicer examples, view the reverse, a sought-after coin shows sharp clear separation of wheat grains.

A nice coin, appealing to many collectors, is colored a soft brown lacking any noticeable marks. 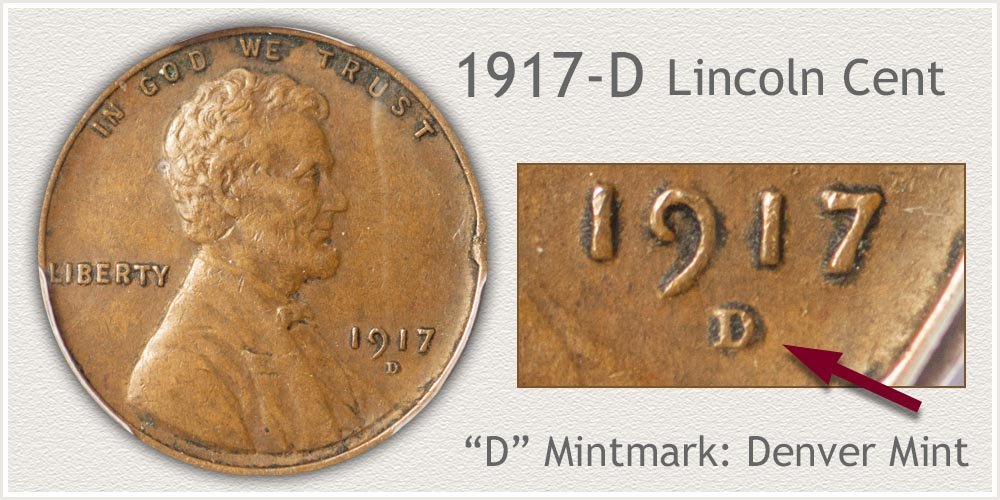 Considered Abundant in lower - worn condition these 1917 Denver wheat cents need a close inspection. Rarity levers increase to Infrequent as grade rises. A sharply detailed coin is in demand, noted by the premium in the Extremely Fine grade.

To achieve a strong value, look closely at the lettering along the rim, both obverse and reverse. Bold letters sitting flat on the field of the coin are preferable to weak and faded letters. Striking variances accrue along the rim of many. 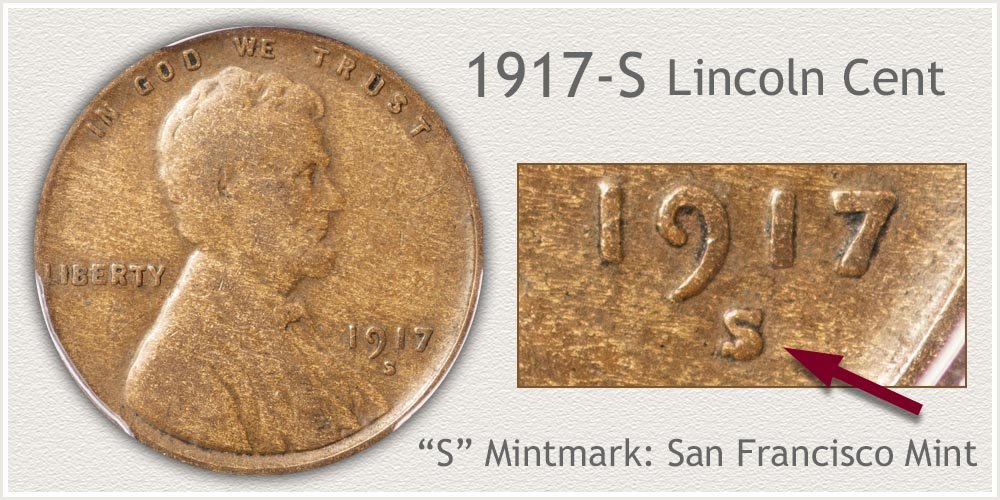 San Francisco produced a high mintage of 32,020,000 coins in 1917. Highest total since the start of the wheat design in 1909. A collector wishing to find a nice, lightly circulated or better coin faces a different supply situation. The majority of coins are worn and missing many key features.

An eye appealing coin enjoys a large step up in value. Inspect Lincoln closely, remaining detail within the hair and beard is an infrequent find. Grading details are in the following step to value.

Grade of an old penny is a definition used by collectors and dealers defining its condition. Grades are listed along the rows in the value chart. Each coin is judged, wear and surface preservation are noted. A comparison with the images of each grade to visualize these different grades.

Achieving an accurate value involves an accurate determination of grade. When viewing your coin first overall impression is important. Positive signs are even color and no distracting marks. 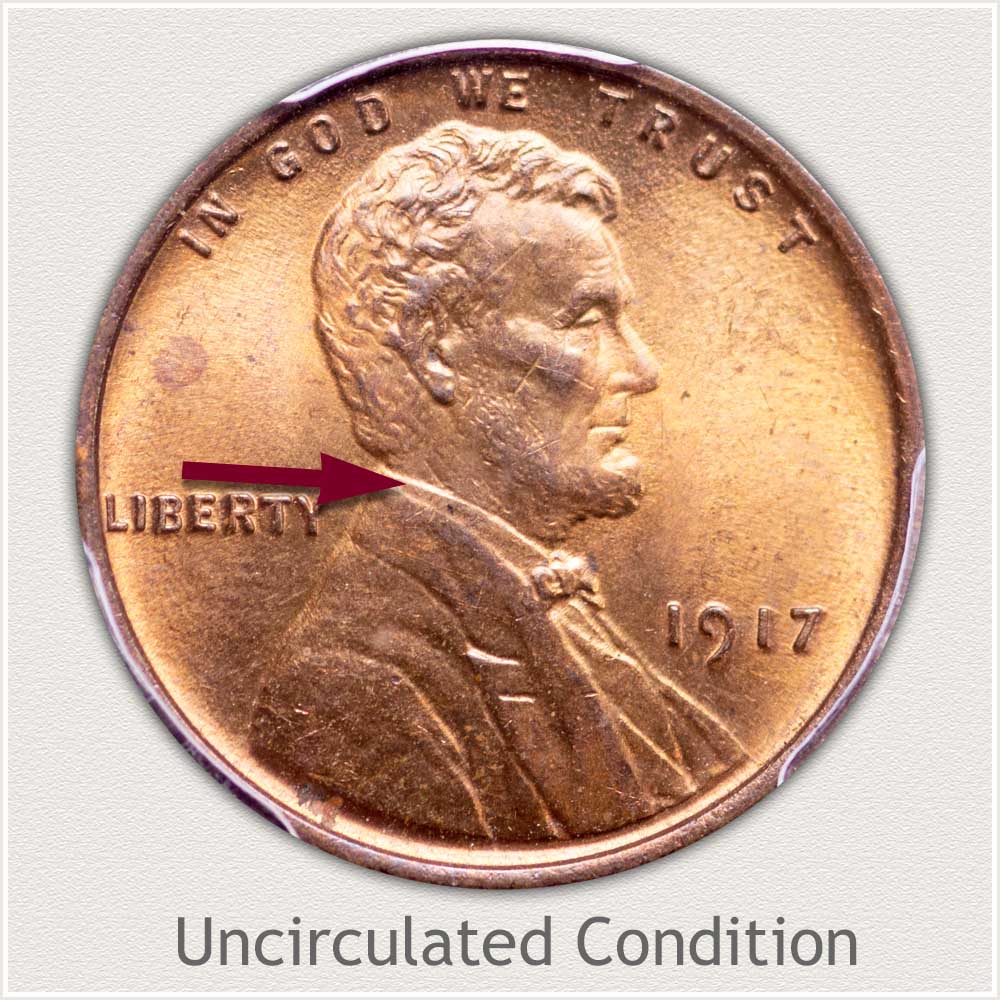 Uncirculated Grade: First point to judge is a continuous coverage of mint luster over the entire surface. Uninterrupted luster is key in defining the mint state - uncirculated grade.

Collar lines representing both Lincoln's shirt and coat are clearly represented on an uncirculated coin. Both are centrally located and high in profile. Inspect closely to confirm texture and luster of original surfaces remain. Wear is indicated by smoothness and color change from surrounding areas.

Eye appeal is a strong indicator of value to the example 1917 penny. Collectors judge both the amount of wear to a coin and its beauty. Ample original luster adds to appeal. 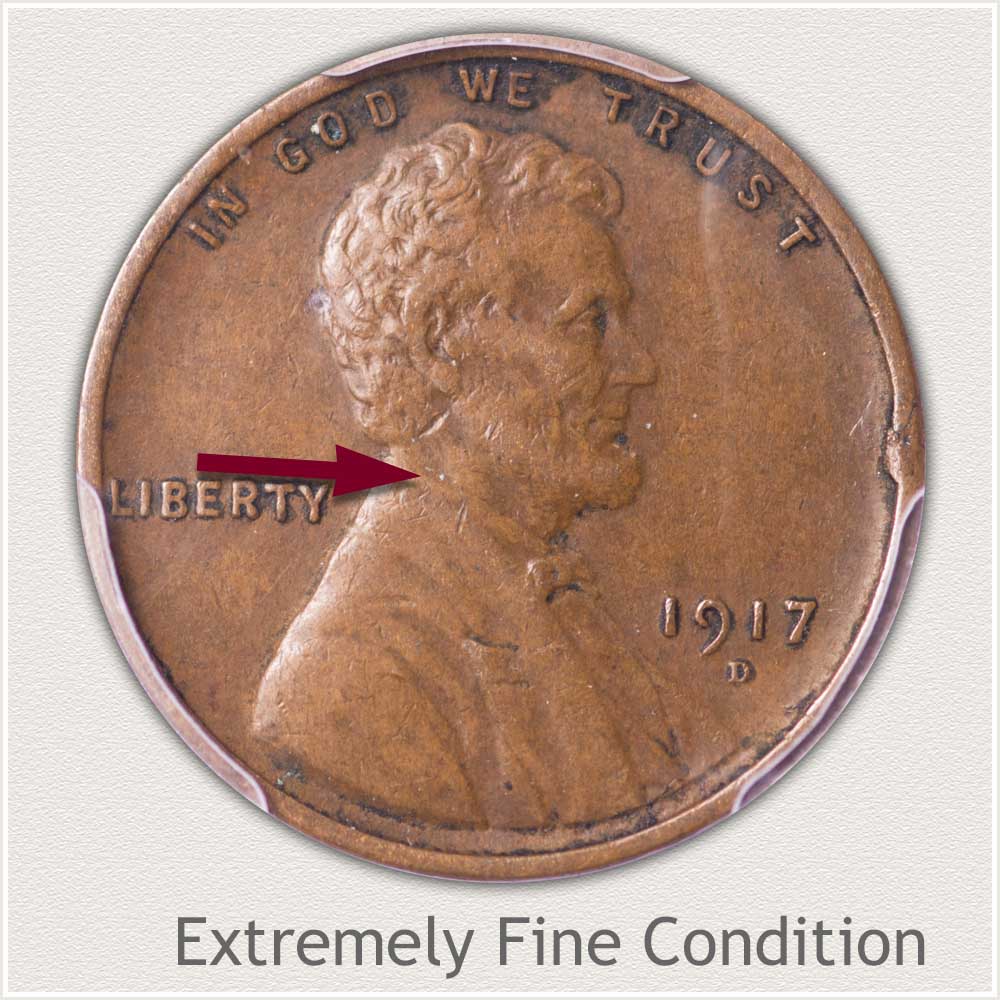 Extremely Fine Grade: Highest points of the design above the field start at Lincoln's shoulder and run to the top of his head. Slight wear in these areas indicates a coin in Extremely Fine grade.

Two lines representing the coat and shirt remain. A clear distinction is seen separating his neck from the shirt collar and coat from the shirt. Wear has softened the once sharp lines but no merging has occurred.

Add the collar detail with a strong representation of waves of hair and a well-preserved coin is displayed. Remaining details are further highlighted by the soft lighter tan color over deeper browns towards the rims. A collectible 1917-D penny. 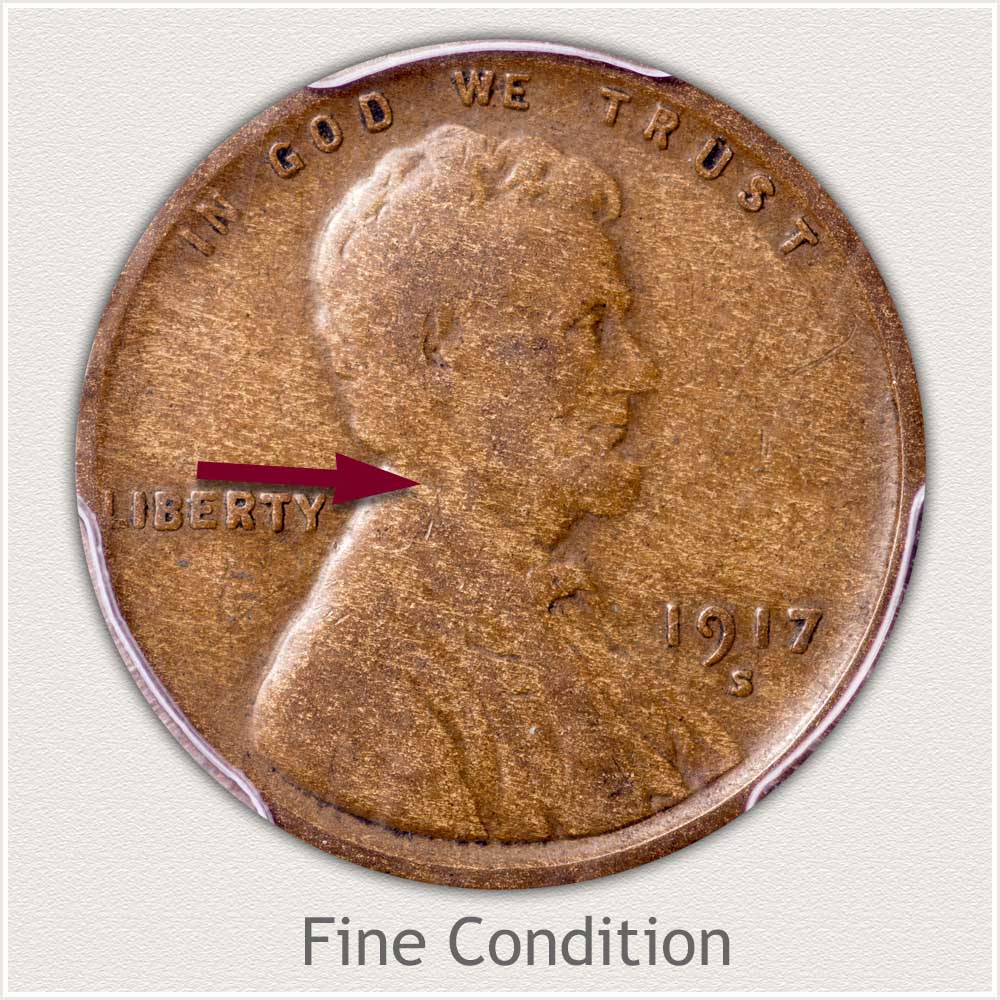 Fine Grade: Fine grade pennies are described as moderate to heavy areas of wear. Lincoln is bold and remains raised from the background.

A distinct collar line separates the area of neck and shirt. Worn heavily a slight suggestion of a collar to his coat is also visible. These details are weak and subtle, however help to indicate a Fine grade example.

Coloration of the 1917-S cent is unusual due to the lighter shades of yellow mixed with browns. Termed "woodgrain" it has appeal to some and others prefer a more even toning. An example of aesthetics and its contribution to value. 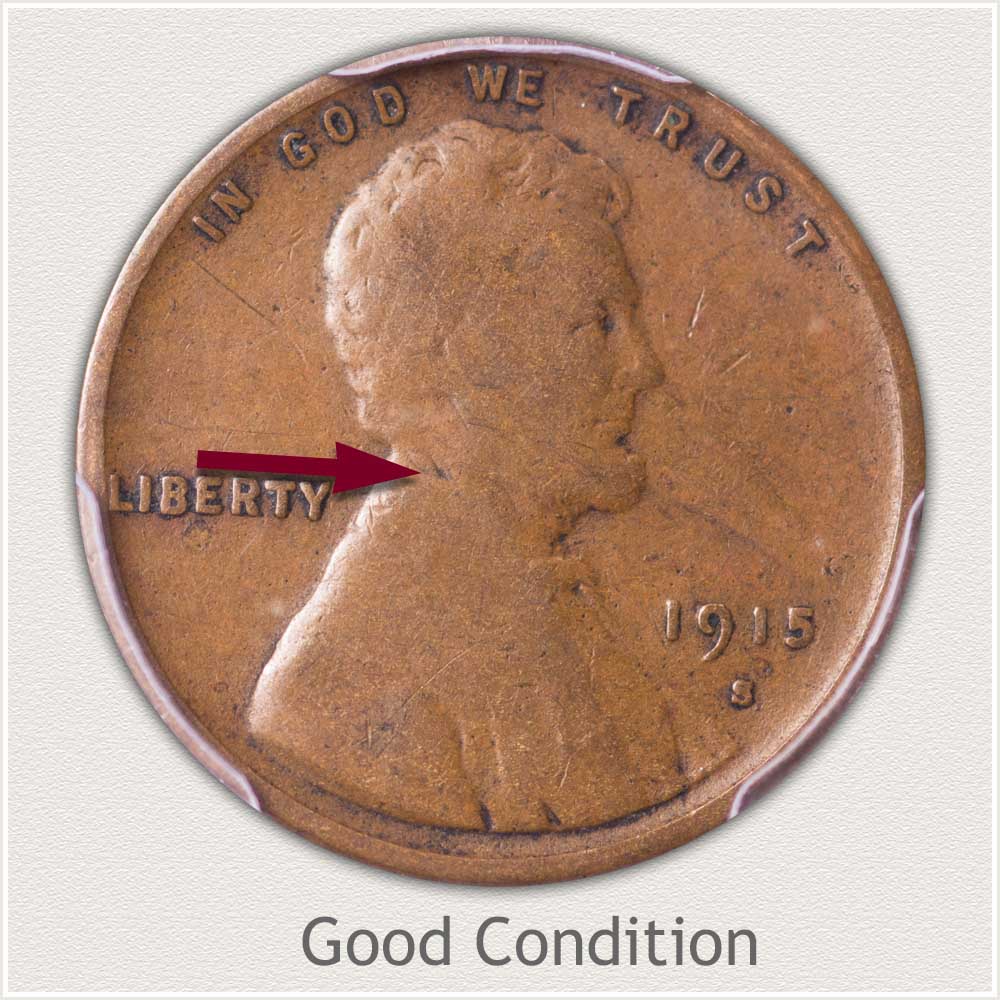 A continuous flat area runs through the center of the design from top to bottom. Metal worn smooth has formed a flat plane. Once featuring lines separating Lincoln's shirt and coat are now gone. A majority of the shirt has merged with his neck.

Eye appeal is enhanced on this example by well-defined bold legends and date. Pleasing soft tans and lights browns are now the color of this well used copper cent.

Grading any coin involves many points to judge. When either; value is high or condition is at the higher end, a closer inspection of the coin is needed. Grading Lincoln Wheat Pennies expands on the grading process with video, images of the grades and in-depth descriptions.

Eye appeal is strongly tied to a coin's value. After determining technical condition, overall aesthetics are considered. The subjective nature of how a coin appeals to each collector is one part of value with many variables. However, certain qualities are universally accepted. 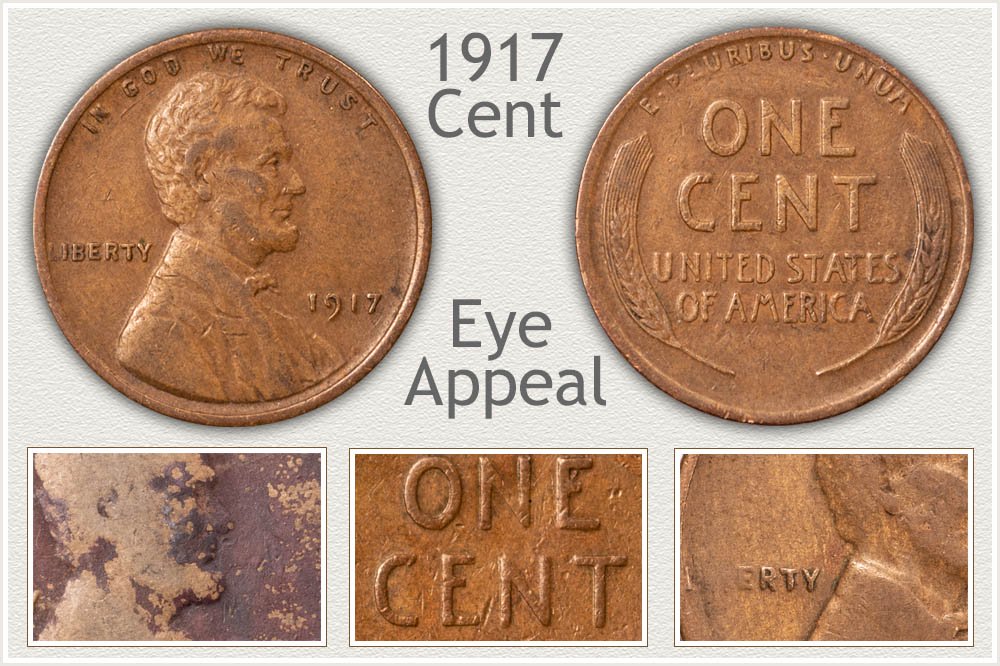 Toning and color of a coin is one of the first qualities seen. Colors of copper, once toned, range widely, allowing for many personal preferences. A collector may appreciate bright untoned surfaces, another subtle tones of red and brown. Blotchy, contrasting colors are not favored by most.

Looking closely, most coins have received nicks to the surface. It is accepted few coins are without any marks, an extremely rare occurrence. Size, quantity, and location is important to eye appeal. Small, non-distracting nicks are preferred. The same marks in noticeable locations is widely considered as lowering appeal.

Striving for quality is a common goal in coin collecting. Excellent examples of the coiner art are sought. Subtle features are strength of strike and depth of design. A well struck coin is visually impressive. Soft striking results in less detail, lowering eye appeal.

The 1917 penny is circulated with even toning, not to dark, with subtle highlights to design elements. Surfaces are mostly mark-free, no major nicks catch the eye. A crisp rim frames the well struck legends and date. Lincoln's portrait is just slightly worn. Importantly, the reverse matches the color of toning, absence of marks, and wear as the obverse. An eye appealing wheat cent and solid value.