Popularity and interest of collectors determine 1957 penny value. A focus is placed on assembling a collection in high grade. Premium condition coins are needed and premium values are attached to these coins.

First step is inspecting to confirm Date | Mint Mark. Judging how much a 1957 cent is worth begins here. Different mints produced important varieties.

Continue by inspecting condition, narrowing the range on the chart.

Listed by date and mint mark variety the chart further narrows value by the condition of the coin. Grades of Good, Fine, Extremely Fine, and Uncirculated are described in the Grading Section below.

Step one is identify and confirm date and mint mark variety. Use the images to locate any possible mint mark.

A second important step is condition. Give special attention to judging condition. Many of these wheat cents are in low average condition. Reading the value chart shows the increase in desirability of higher condition coins. In the Grading Section images are used to match your coin. Inspecting for wear and subtle points to condition are described.

Two varieties of 1957 wheat pennies were struck. Both mints combined, totaled 1,333,882,000 cents, 5th highest year of the wheat series. These along with the rest of the 1950's production represents a large portion of surviving wheat pennies. 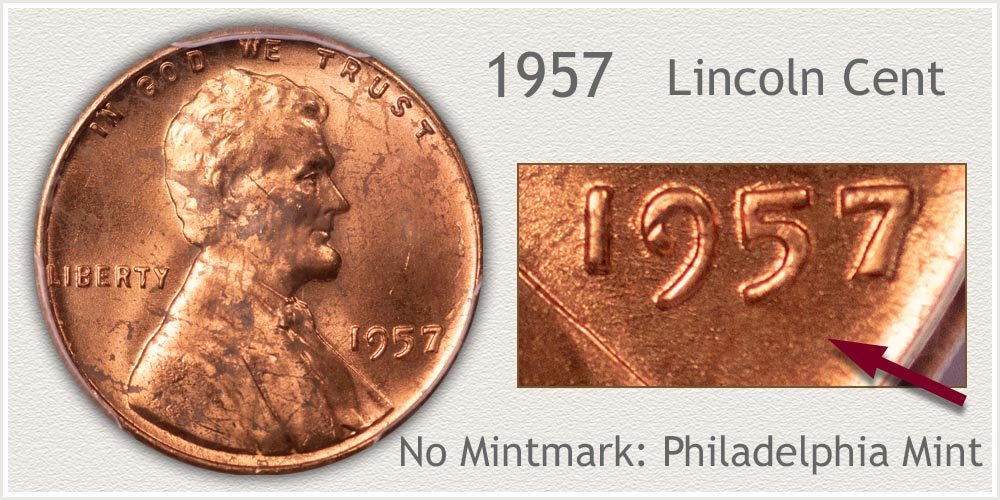 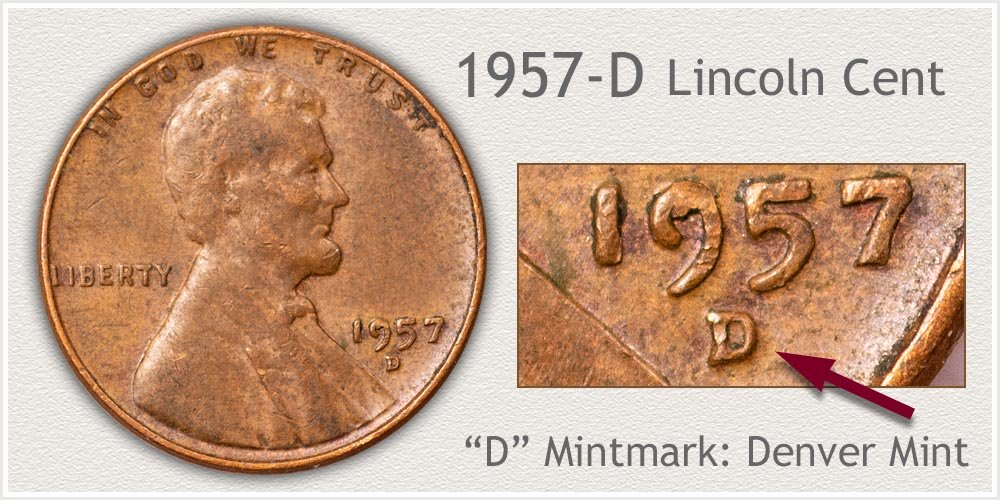 Three value brackets exist for these latter year wheat cents. Each range of value is defined by collecting preferences. High condition examples find their way into advanced collections. Lightly circulated coins are popular with starting collectors. 1957-D pennies in average circulated condition are a excelent introduction to the coin hobby.

Grading a coin involves judging condition of the devices, legend, and fields against a standard for the grade. Images are compared to your coin helping visualize differences in amount of wear the surface.

Work over a soft surface and when viewing, tilt the coin under a light helping bring out subtle details.

Review the uncirculated example image first, it gives a good illustration of the complete amount of original detail on a coin without any wear to the surface. 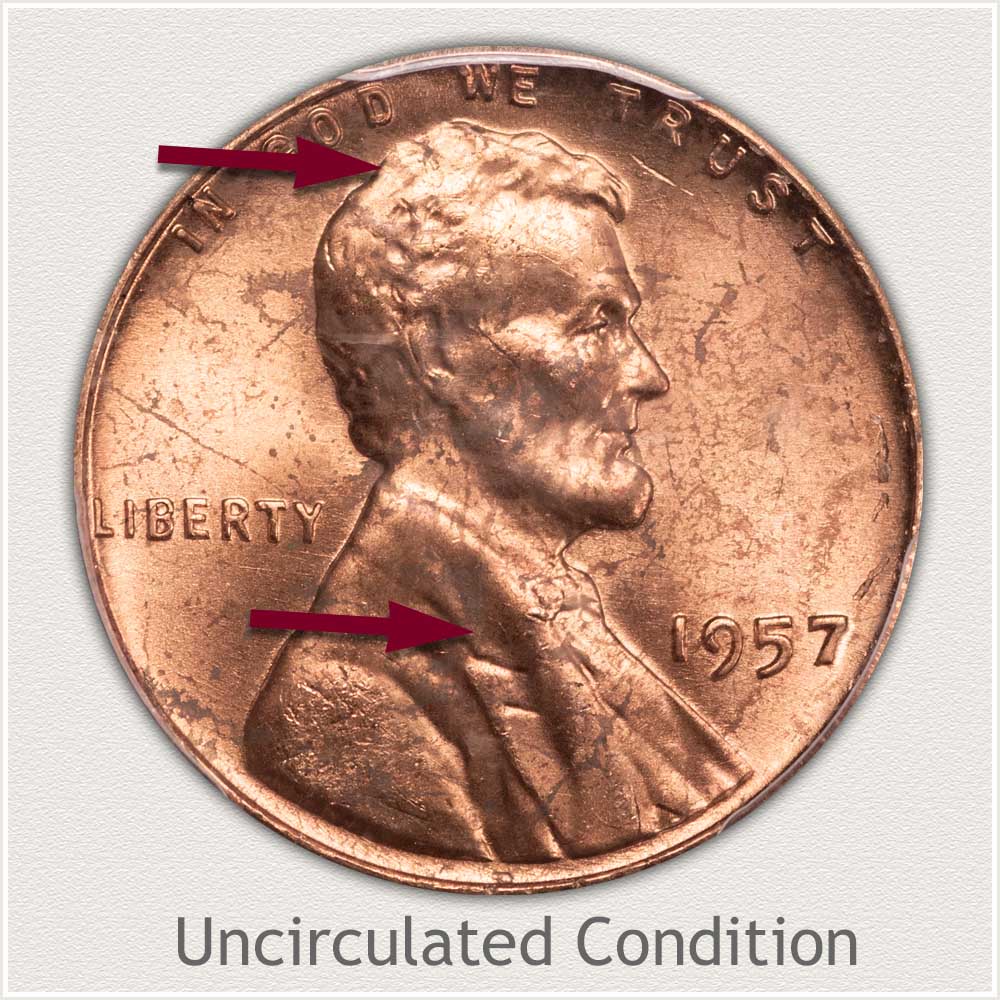 Uncirculated Grade: An uncirculated 1957 cent shows no signs of wear to any surface of design, legends, and fields. Mint frost, the luster of coin, imparted at the time of striking remains undisturbed.

One area high in profile is Lincoln's hair just above his forehead. Protected by the rim and lettering, any wear shows at the tops of the curls. Luster remaining indicates an uncirculated coin. Second area to judge is the coat lapel, a long, exposed line along the shirt. Wear quickly dulls and smooths luster.

Luster radiates from the coin, both hair and lapel are the same texture of surrounding metal.

Mint State - Uncirculated Grade and Toning 1957 Penny: Toning of copper begins naturally and quickly after the minting process. If protected this toning is minimal. Bright luster and natural color wheat cents of the 1950's enjoy highest demand and value. It is important to note; toning is not an indication of wear.

Inspect the surface of the metal to detect wear. On all examples Lincoln's hair above his forehead is without wear. A fine texture remains on high points. Lincoln's coat lapel shows no smoothing or removal of texture.

Value and demand of the bright and original luster 1957 penny is highest. Followed closely by the appealing toning of the center example. Demand is lower for the coin on the far right. It remains technically mint state with no wear, however appeal to collectors falls below a brighter coin. 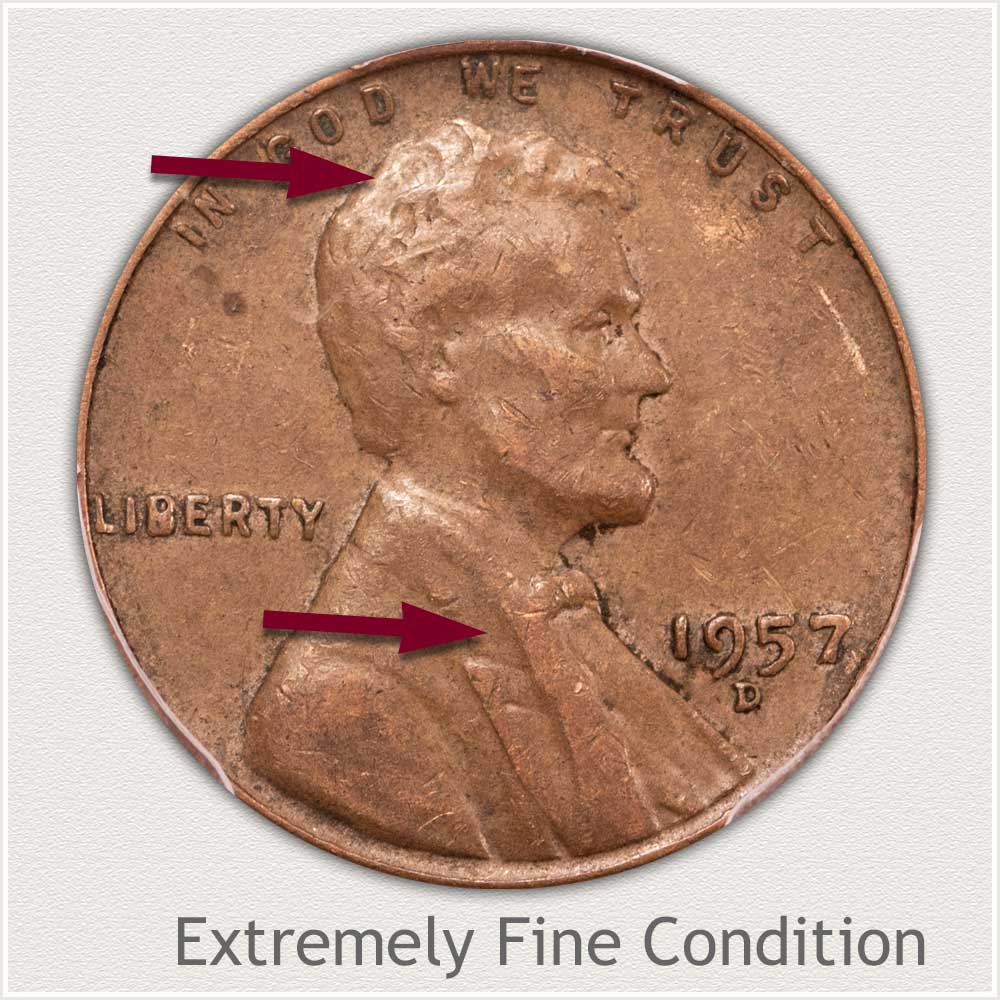 Extremely Fine Grade: A collectible 1957 penny in Extremely Fine grade shows only a small amount of wear. Defining the grade is even, light wear on high areas.

Toning has developed a light brown color to the surface and wear is noticeable on high profile elements of the design. Lincoln's hair above his forehead shows a small degree of flatness to the tops of the waves. Importantly, all major lines remain separating waves of hair.

Secondly, Lincoln's coat lapel has a defining edge separating the shirt. Bold in relief and prone to first signs of wear, inspect the edge. A light smoothing defines an extremely fine grade coin. Bold features of Lincoln, legends, and date stand out clearly on the 1957 example cent.

Lightly circulated wheat cents dating 1944 through 1958 are a popular collectible with new and young collectors. Soft, light shades of brown color over the surface are favored. Any distracting marks or discoloration lowers appeal, despite light wear. Ample supplies allow collectors to choose from many examples when considering adding a coin to their collection. 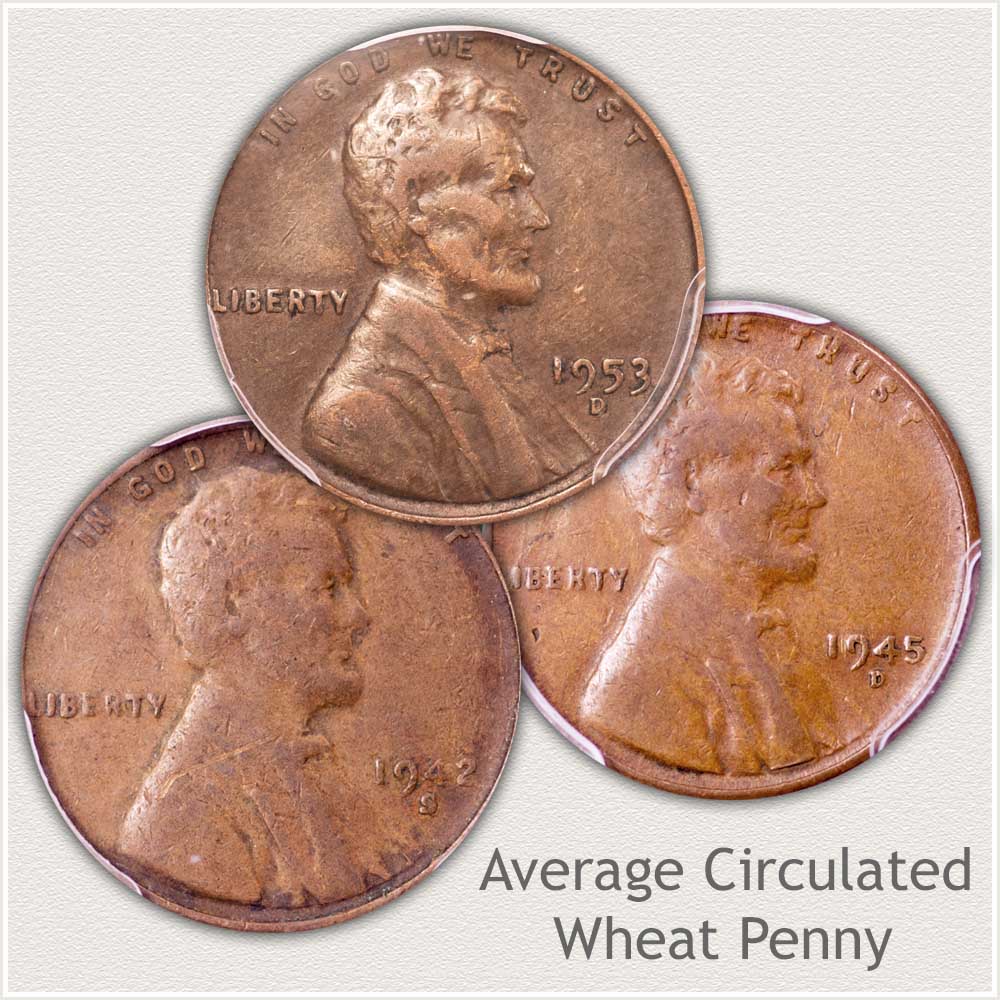 Average Circulated Condition: As wear removes moderate to heavy amounts of detail from a wheat cent; wide areas of flatness remain. These coins fall below the Extremely Fine grade and are abundant. Such coins are grouped into a classification of average circulated condition.

A few features are used to determine extent of wear. Centrally located, the cheek is worn showing a flatness and connects with the ear. A wide flat jaw line is also typical of an average condition wheat penny. Notice the areas of wear on Lincoln's coat and how the flatness extends from his collar along the shirt line to rim.

Large quantities of cents from the 1950's was saved and now available in average circulated condition, these moderately worn examples form the base value to wheat cents.

After five decades the 1950's saw the last of Wheat cents production. Denver struck over one billion wheat pennies in 1957. Only three other years saw a billion cents from a single mint; 1956-D | 1945 and 1944 Philadelphia. 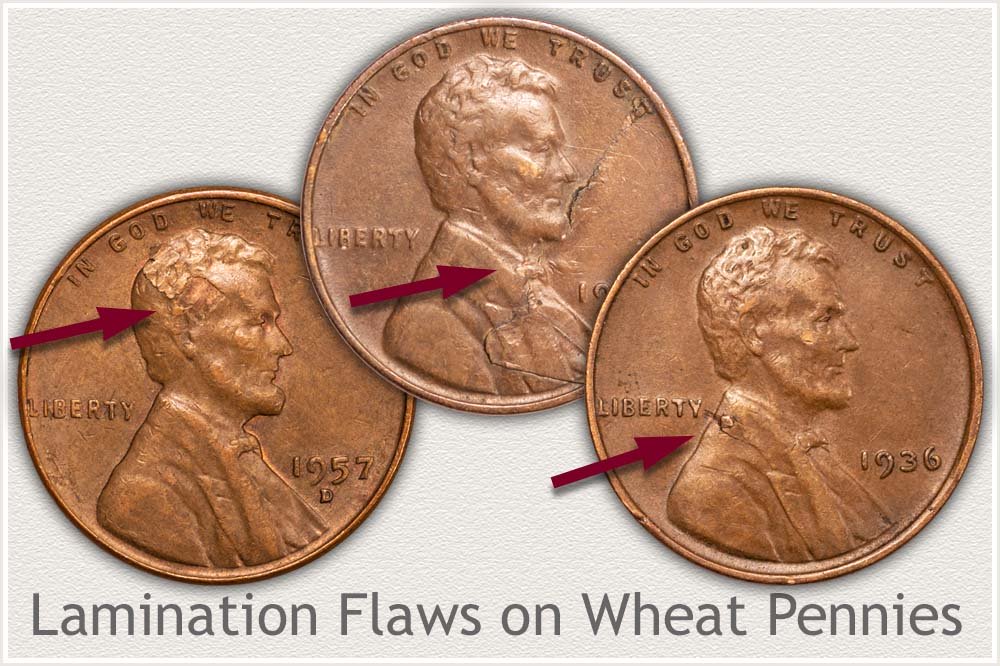 Imaged are three examples of an error occurring within the span of wheat penny series. A 1957-D cent with a lamination error found in the hair just above Lincoln's head. The 1944 penny shows a large lamination fault in front of Lincoln and covering part of his coat. Lamination faults are known in the 1930's represented by the 1936 cent, look just past the "Y" in "Liberty" a small split in the metal with a minor fold over.

Minting a coin involves many exacting steps and processes. Mixing 95% copper with 5% tin and zinc must be complete to produce the copper alloy used in the penny. If faults happen in the alloy process a defect occurs and if near the surface causes flacks and splits in the metal.

Placing a value involves both aesthetics and underlining rarity of the coin. Each example coin is lightly worn and their dates and mints are considered Abundant on the rarity scale. All are an affordable example of the wheat series. In these examples a lamination error adds interest, fascination, and a small premium to value. Interestingly, if a higher value date considered scarce on the rarity scale shows a lamination error it is often considered a flaw. Collectors assembling date and mint sets prefer coins representing high quality and preservation.

Storing your coins correctly preserves value. Single high value coins need protection from elements in the air and contact to their surfaces. Large quantities of coins are conveniently housed in special holders. Safe methods are explored.