When viewing the chart, date and mint mark combinations, show little difference in how much they are worth in typical average condition.

Standing out is the quick rise in value beginning with the Extremely Fine condition. Grading is key to judgement.

Listings on the chart begin with date and mint mark variety. The chart further narrows value by the condition of the coin. Grades of Good, Fine, Extremely Fine, and Uncirculated are described in the Grading Section below.

Whether its many coins, or just your 1951 cent, judging each individually is important to an accurate value. Collectors follow a step by step approach of examining: Date | Mint Mark | Condition. These steps determine how much coins are worth.

Step one is identify and confirm the mint that struck the coin. Just below are images to locate any possible mint mark.

Give special attention to Grading Condition. Reading the value chart shows the increase in desirability of higher condition coins. In the Grading Section, images are used to match your coin, inspecting for wear and subtle points to condition.

Production of wheat pennies, all varieties combined, was the 10th highest in 1951. 1,055,941,000 struck and released into circulation. Striking the fewest was the San Francisco mint, continuing its historical trend. Date and mintmark collecting places a slightly higher value for the "S" mint cents. 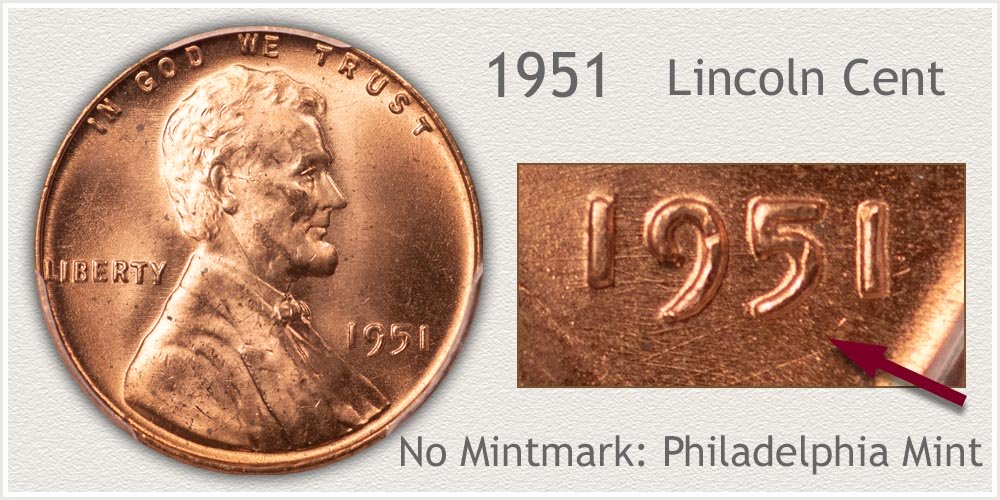 Ample production from the Philadelphia mint finds this variety Abundant on the rarity scale. An average quality 1951 penny has passed through circulation and is moderately worn. With popularity of collecting the wheat series and including all date and mint combinations, demand exist for these.

Preferences of collectors are towards nicer quality coins, value follows. Inspect both sides of your coin with an eye towards a high profile in Lincoln's portrait and depth of lettering on the reverse. Ample detail showing separation of Lincoln's coat and lapel, and a bold ONE CENT is desirable. 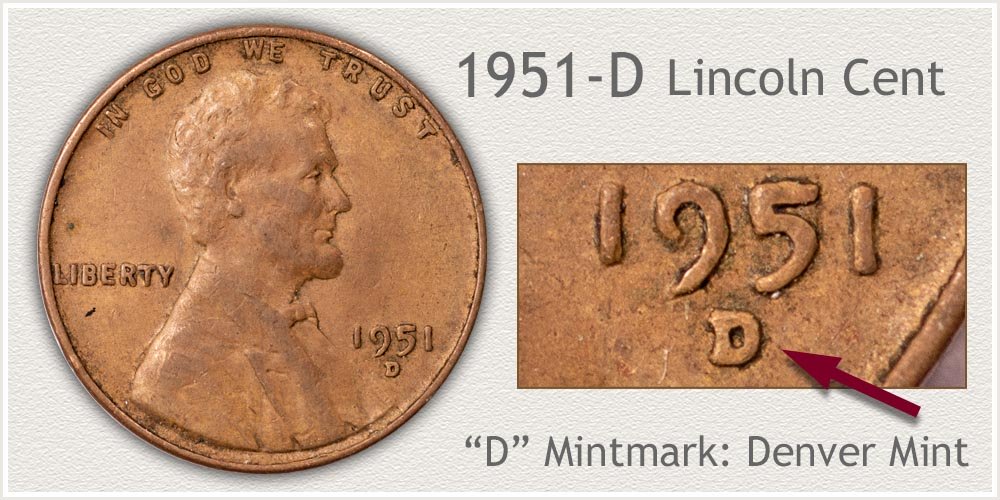 Denver mint now produces more Lincoln pennies per year than other mints. Large supplies and surviving numbers places these as Abundant on the rarity scale. Collectors having many to choose from, seek eye pleasing examples.

A circulated 1951-D penny is considered above average if lightly worn and crisp in definition. A mint state example is sought with bright original reddish copper coloring and few contact marks. 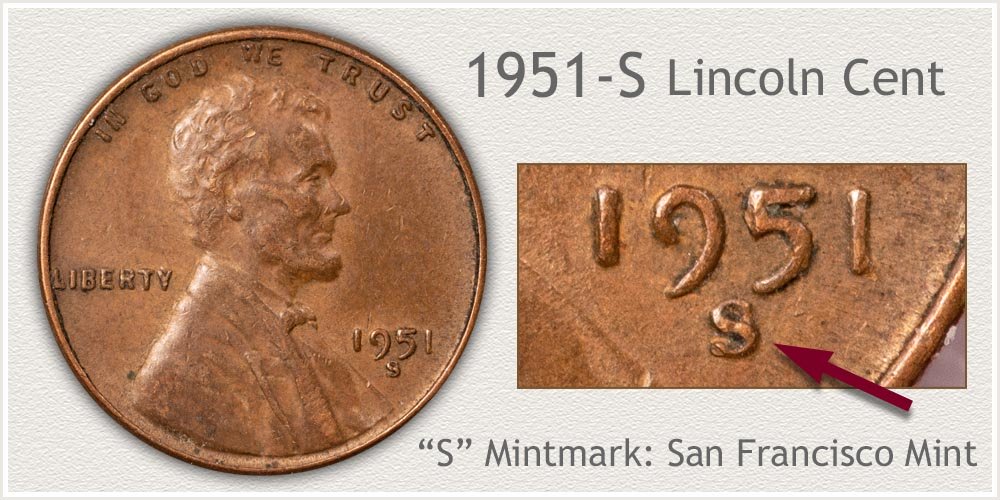 Rated as Abundant in numbers available, a special quality is needed to set a coin apart in value. 136,010,000 produced contributes to ample supplies. A close inspection of overall appearance and noting well defined features of Lincoln holds potential.

Lincoln's portrait is filled with both major and subtle detail. A fully separated bow-tie, showing all edges and defined knot indicates a higher condition penny.

Value is further refined by condition of a coin. Preservation of devices, legends, and fields are inspected as to condition. Lincoln's portrait is high in profile and subject to wear. Stages of wear are identified and a grade is determined.

Handle the coin gently, hold the edges only avoiding touching the surface. Copper reacts to most elements. A couple precautions helps preserve the future condition of the coin. 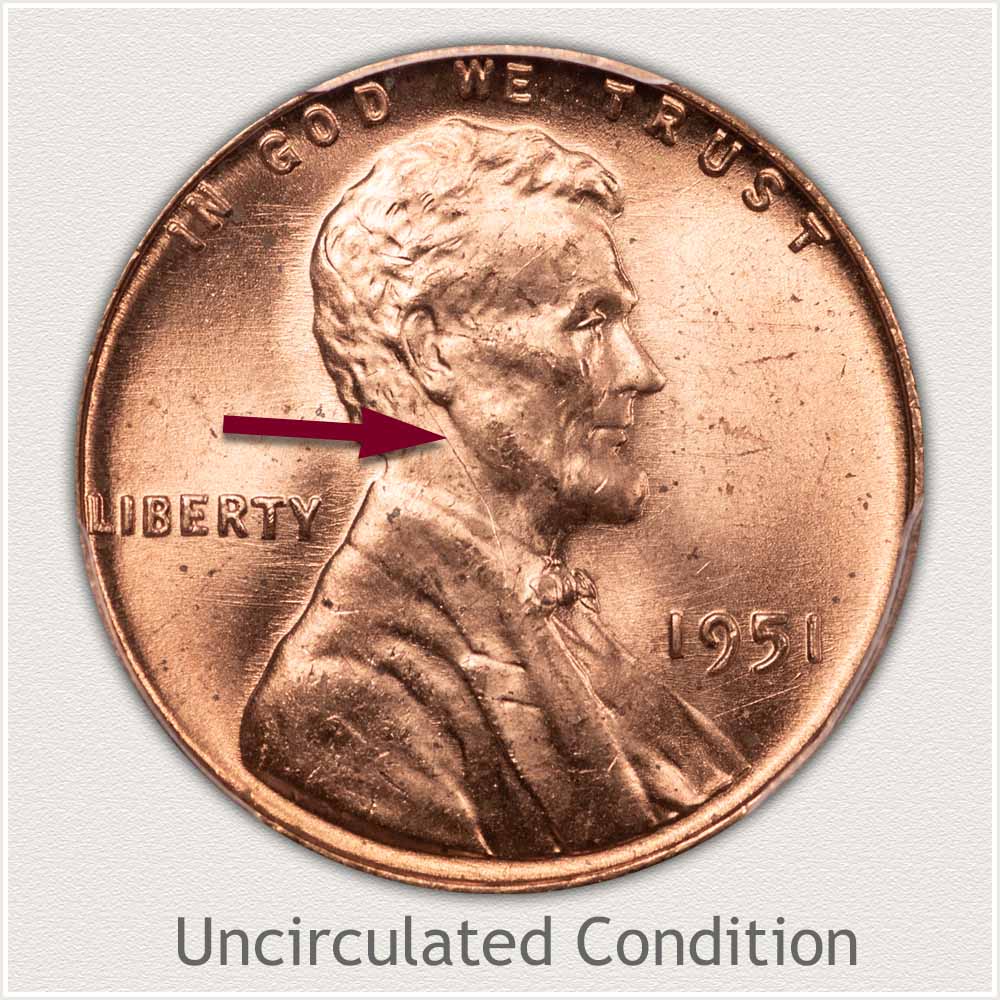 Uncirculated Grade: A center piece to a wheat penny collection is mint state condition coins. These coins are in the condition they left the mint. Many examples from the 1950's still remain very bright with original color. Important is to recognize there is no wear to the surface and all original texture is intact.

A focal point to both receiving wear and high in profile is Lincoln's cheek and jaw. These two areas must remain with no smoothing to the surface. Contact marks and abrasions from other coins is often found on the cheek and jaw however these are not considered wear.

Bright luster remains on the mint state 1951 penny image. Luster also covers the high areas. Tilt the coin at an angle to the light and a fine texture is visible indicating an unworn surface.

Colors of Mint State Grade Wheat Penny: Viewing the line of pennies shows the various colors and toning a mint state penny develops. Time and level of protection determines the depth of toning. Wear - removal of metal - is not indicated by toning.

First is the bright luster 1951 cent, very little toning has occurred. Moderate toning is beginning to form on the high points of the second example. A mostly brown color is displayed to the far-right coin. Looking closely at all examples, Lincoln's jaw line and cheek are without wear.

Mint state - uncirculated cents come in a complete range of toning. Collectors place a premium on eye appeal as to the color and amount of toning. Pleasing bright luster is valued high and toning either enhances or detracts. The central coin is notable by the evenly distributed colors. Generally, an uncirculated wheat cent toned brown is lower in value. 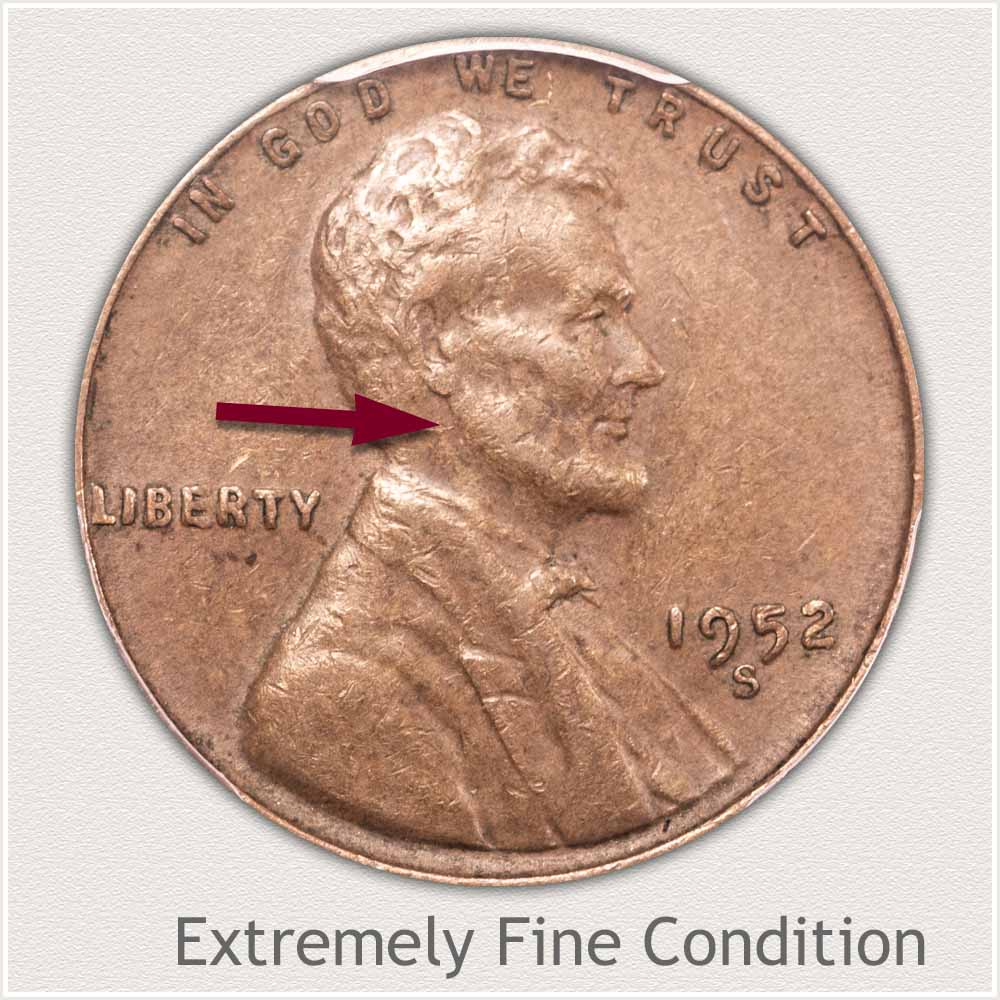 Extremely Fine Grade: After a coin is used for a short time a small amount of metal is worn away defining an extremely fine grade wheat cent. Light wear seen on the tops of design elements identifies the grade.

Lincoln's cheek and jaw remain well detailed and rounded. Both remain bold. A clear separation from the ear is seen with flatness limited to just the uppermost areas.

Extremely fine grade wheat pennies are sought by collectors and are a nice affordable collection. This example is notable for mark free surfaces. Heavy nicks are absent giving a crisp look to the coin. 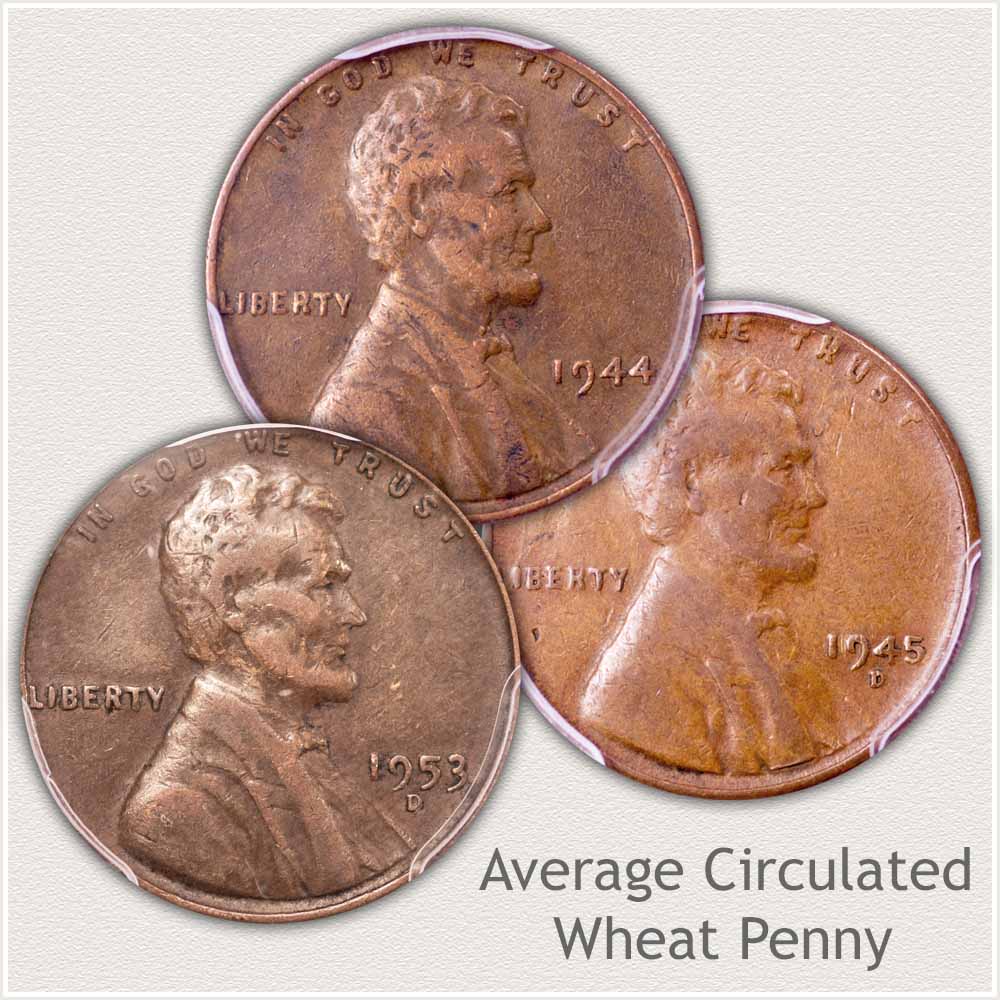 Average Circulated Condition: Starting in the mid 1940's through the end of the wheat series in 1958, circulated pennies worn below the extremely fine grade are considered average circulated quality. These are abundant and form a base value to all wheat cents.

A good indication of moderated wear is the flat and level surface now displayed along the jaw and cheek. These areas were ounce rounded and high relief. Lincoln's temple area now connects with his hair and is flattened, confirming an average quality coin.

Among these base value cents a further separation is distracting marks and dark, uneven colors. A warm brown surface with few marks is preferred.

Strike quality varies among wheat pennies. A noticeable difference is often the deciding factor between two coins and their appeal to a collector. A well struck cent displays crisp details of Lincoln's portrait, bold lettering and date. Latter year wheat cents, 1944 through 1958, are abundant and any edge in appeal improves marketability. Circulated - Extremely Fine condition examples with a strong strike form a quality collection. 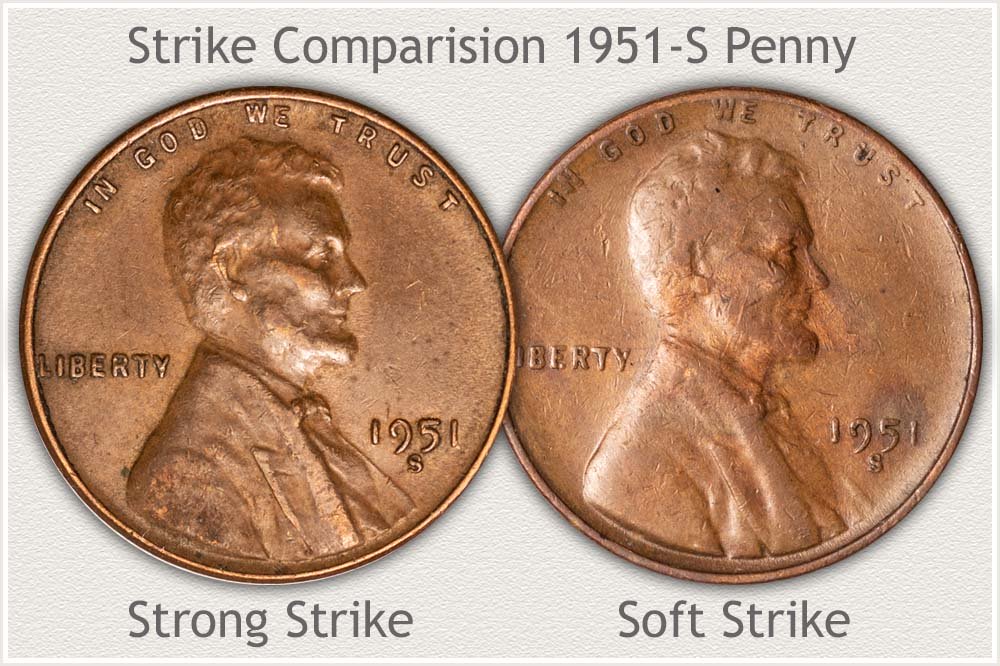 Comparing and judging original depth of strike on the example 1951-S pennies identifies the higher appeal coin. Overall, both coins are close in technical grade when judging wear. The visual difference is due to a weaker strike. A softer, less defined amount of detail was struck into one coin.

Shallow depth in profile of Lincoln's hair loses detail quickly. In a more protected area, a less refined bow-tie is noted on the weak strike cent. Crisp detail to the tie on the well struck cent shows a defined central knot and ribbon on each side.

Confirming a higher quality is the raised rim on the well struck penny. Lettering is clearly separated from the rim and sits flat on the field. Contrast the shallow rim and rolled appearance into the lettering of the softly struck example.

Judging condition and a further assessment of strike quality identifies an appealing coin. With abundant supplies of circulated examples, collectors have many to choose from. A crisp, evenly toned, lightly circulated 1951-S with a quality strike is preferred.